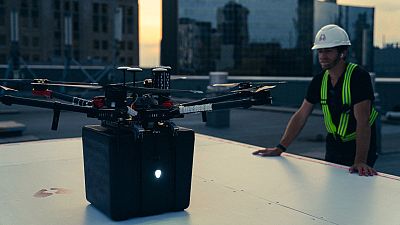 It took less than 10 minutes for a drone to make an emergency 1.2 kilometer trip to deliver a set of lungs needed for a life-saving transplant.

This world-first took place at the end of September, in Toronto, Canada, AFP reported.

The drone flew over the skies of the Canadian metropolis in the middle of the night, taking off from the UHN's Toronto Western Hospital and landing on the roof of the General Hospital.

The operation was made possible due to a refrigerated container in light carbon fibre which maintains the thermal parameters of the organ so that it is viable for transplantation.

The lungs were then successfully transplanted into a 60-year-old patient with pulmonary fibrosis.

"We have proved, and this is a very important point, that it can be done safely," Dr Shaf Keshavjee, Director of the Toronto Lung ​Transplant Program at UHN's Ajmera Transplant Centre, told AFP.

The flight was led by the Toronto Lung Transplant Program in partnership with Quebec-based biotechnology aviation company Unither Bioelectronics. It also received support from Trillium Gift of Life Network (TGLN), the organisation in charge of organ and tissue donation in Ontario.

"I think that drone technologies have a huge potential to become a standard in terms of health care," said Mikaël Cardinal, vice-president of Unither Bioelectronics.

The use of drones and autonomous aircraft could solve one of the biggest issues raised by this experiment: how to save time.

"Many times, we lose a life-saving organ because we can't get to it in time, or we can't get it back before the organ deteriorates and is no longer suitable for transplant," said Dr Atul Hamar, Ajmera Transplant Centre's Medical Director.

"Having drones to transport lungs and other organs across the continent would help move them faster and more efficiently. In the long-term, this would also contribute to transporting them seamlessly to and from highly-specialised organ repair centres like the Ajmera Transplant Centre in Toronto."

The operation shows that drone delivery technology, which is already operational for packages purchased online in some countries, could actually be used to improve the current system of organ transport and reduce its cost.

"The challenge now is to adapt this technology to make it available to patients around the world," Dr Keshavjee said. He pointed out that the lung is "the most fragile of all organs" to be stored and transported.