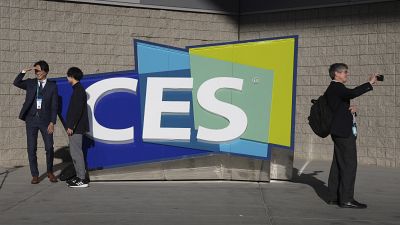 The 2022 Consumer Electronics Show (CES) threw open its doors to thousands on Wednesday in Las Vegas, despite surging COVID-19 cases in the United States, as one of the world's largest trade fairs tries to get back to business.

After a series of high-profile companies like Amazon and Google cancelled over climbing virus risk, the return of the in-person convention was initially cast in doubt.

But organisers insisted on the mandatory requirements of vaccination health pass and facemask wearing inside the event, as well as the importance for the show — with its mix of journalists, entrepreneurs, and tech lovers from around the world — to go on.

And tech lovers weren't disappointed; one of the keywords at this year's tech fair has been sustainability, with electric vehicle manufacturers being among those who have made it to Las Vegas.

From racing cars to diggers, and superbikes which claim to be able to go toe to toe with some of the world's leading brands, manufacturers didn't miss any occasion to dazzle audiences and proof you could still ride with style while going green.

No longer, they say, should electric mean making sacrifices when it comes to style.

"Well, that's the key. I mean until Damon came along, the answer was no, if you went from a gas bike to an electric motorbike you would be making a compromise, which no one is willing to do just to go electric," Jay Giraud, CEO of Damon Motorcycles, told Euronews Next.

"That's why we focused on developing an entirely new kind of electric power train technology that puts in as much power and energy necessary to surpass the performance of gas.

"So, this motorcycle is capable of 200 mph, 146 miles of range, zero to 60 in less than three seconds and that is as good or better than any superbike you can buy from any of the major manufacturers".

Other vehicles, like gas-guzzling trucks, as much a symbol of America as Bruce Springsteen and drive-in diners, are also going fully electric and are already available for sale, providing people be willing to pay as much as three times the cost of a diesel or petrol truck.

Another challenge for would-be buyers would be to find somewhere to charge their electric truck, as the charging infrastructure for this kind of vehicle is still at an early stage.

In contrast, charging electric superbikes is relatively simple, according to Giraud.

"There are tens of thousands of charging stations all over North America and Europe already — they are basically ubiquitous," he revealed.

With no surprise to entrepreneurs and tech lovers, one of the big brands on display this year is Tesla.

Elon Musk's engineering company has been going underground, building tunnels beneath the conference centre, to ferry passengers back and forth from the venues.

After descending into the tunnels beneath the conference centre, visitors are invited to jump into one of the futuristic cars to take an undoubtedly slick and sustainable — if slightly eerie trip — underground to your destination.

One day, it's possible, all travels will look like this — but that time could still be a fair way off yet.