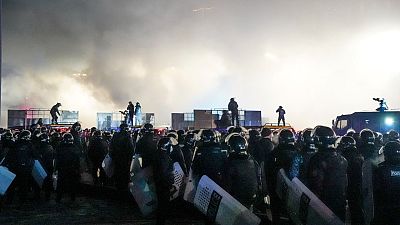 The price of Bitcoin slumped on Friday to lows not seen since September as Kazakhstan, the second-biggest country for Bitcoin mining, lost Internet access amid the political upheaval over energy prices.

The world’s biggest cryptocurrency shed as much as eight per cent and tumbled under $41,000 (€36,000) as investors sold off their cryptos, in part due to the Kazakhstan crisis but also because of the minutes released by the US central bank showing it would tighten monetary policy.

Cybersecurity watchdog Netblocks said Internet disruption in Kazakhstan continued on a nationwide scale as of Friday morning, with national connectivity observed at just 5 per cent of ordinary levels.

The ongoing disruptions come amid widening protests against sudden energy price rises that started at the weekend in the western town of Zhanaozen.

The Central Asian nation has been the second-biggest Bitcoin mining home after the United States. It comes after Kazakhstan's neighbour China pushed out its cryptocurrency miners in May last year due to the high consumption of energy Bitcoin mining drained from the country.

Mining is the process that allows you to create new coins and maintain a log of transactions.

Bitcoin uses the Proof of Work mechanism. The system requires a global network of computers to run at the same time when a transaction takes place. This is why it uses so much energy as it is designed to encourage increased computing effort.

Kazakhstan provided a refuge for China’s exiled Bitcoin miners, not only due to proximity but also because the country’s old coal mines provide cheap and abundant energy.

The US is leading the global Bitcoin mining market, according to the Cambridge Centre for Alternative Finance.

Kazakhstan’s government has tried to tighten rules on mining in recent months in an effort to decarbonise the economy. The country recently implemented a law to introduce extra taxes from crypto mining that will take effect this year.

But some miners are optimistic the political storm will blow over.

In a post on Twitter, Kazakh miner Didar Bekbau said: "Yes, no internet, so no mining…Hopefully next week everything will be ok".

Is the Big Apple about to become the US' latest crypto hub?