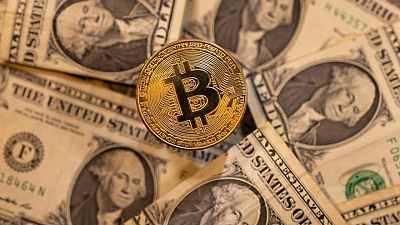 Bitcoin and other cryptocurrencies fell sharply on Thursday, following the release of minutes from the Federal Reserve's last meeting, which showed it leaned toward more aggressive policy action, sapping investor appetite for riskier assets such as cryptos.

Bitcoin, the world's largest cryptocurrency fell below $43,000 (€38,000) on Thursday, down nearly 7 per cent from the 24 hours previous, according to CoinDesk data.

Other cryptocurrencies fell too, with Ether, the world's second-largest cryptocurrency which underpins the Ethereum network, lost 5.2 per cent on Wednesday, and touched its lowest level since October, before bouncing back slightly to $3,460 (€3,060).

What did the minutes show?

The Fed's minutes showed expectations of less monetary policy support and higher interest rates. The Fed indicated it could move up its timetable for raising interest rates to mid-March, meaning it will stop printing money and make it more expensive to borrow.

The fall "correlated with the 'risk off' move across most traditional asset classes," said Matt Dibb, COO of Singapore-based crypto fund distributor, Stack Funds, pointing to the declines in the Nasdaq in particular.

Moves in cryptocurrency markets are becoming more aligned with those in traditional markets as the number of institutions trading both crypto and other assets grows.

The Nasdaq plunged more than 3 per cent overnight in its biggest one-day percentage drop since February, after Fed minutes showed US policymakers had discussed reducing the bank's balance sheet at their December meeting, when they also decided to accelerate finishing their bond-buying programme.

Share markets in Asia sold off on Thursday as well, while US Treasury yields edged higher.

Crypto analysts were also watching to see whether anti-government protests in Kazakhstan, which were initially sparked by rising fuel prices, would affect the Bitcoin network.

The Kazakh government late last year began cracking down on some miners, fearing the energy-intensive process was using too much power.

Why 2021 was cryptocurrency's wildest year yet