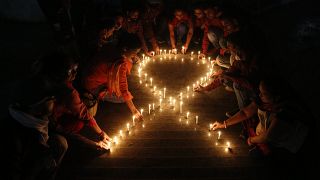 Every year, December 1 is observed as World AIDS Day across the globe, an occasion to spread awareness about the disease and bring people together in the fight against HIV.

The theme of World AIDS Day 2021 is "End inequalities. End AIDS", with a special focus on highlighting the growing inequalities in access to essential HIV services.

Because while the world continues to fight the coronavirus pandemic and health systems struggle to deal with more cases and new variants, people suffering other diseases say they feel left behind.

A recent UNAIDS report revealed that COVID-19 lockdowns and other restrictions have badly disrupted HIV testing around the world.

In many countries, this has led to steep drops in HIV diagnoses, referrals to care services, and HIV treatment initiations.

This was further emphasised by another report, jointly published by the WHO Regional Office for Europe and the European Centre for Disease Prevention and Control (ECDC), which showed a 24% drop in the rate of newly diagnosed HIV cases between 2019 and 2020.

HIV destroys these CD4 cells, weakening a person's immunity against infections such as tuberculosis (TB) and some cancers. If the person's CD4 cell count falls below 200, their immunity is severely compromised, leaving them more susceptible to infections.

Someone with a CD4 count below 200 is described as having AIDS (acquired immunodeficiency syndrome).

'A significant challenge' in Europe and globally

The virus remains one of the most important communicable diseases in Europe, according to the ECDC.

The WHO also revealed that an estimated 2.6 million people live with HIV in Europe today, among whom an estimated 572 000 are unaware of their infection.

And although notable progress has been made in the WHO European Region towards the 90-90-90 goals (90% of people living with HIV knowing their status, 90% of people with diagnosed HIV receiving sustained antiretroviral therapy, and 90% of people receiving ART having viral suppression), progress towards these goals is uneven across the region.

According to the most recent data, the majority (79%) of newly diagnosed people were from the eastern part of Europe, while countries in the European Union and European Economic Area (EU/EAA) mostly showed a decrease in the rates of new diagnoses.

"HIV is still a significant problem across the globe. It still takes many, many lives, and millions of people have lost their lives since the start of the pandemic. Other organisations say the coronavirus rightly has taken a lot of attention globally, but there are other health threats, and HIV and AIDS are still a significant health challenge globally, as well as in many countries in Europe, as well as in the UK," Danny Beales, the head of policy and campaigns at the National AIDS Trust in the UK, told Euronews.

It pledged to expand prevention methods, with HIV testing scaled up in high-risk populations, including black-African communities, where the uptake is low.

"With the advances that we've seen in medical research and treatment, and 40 years on since the start of the epidemic, HIV doesn't have to be a life-ending condition anymore. People can live long, healthy lives and can't pass on the virus, which I think is an incredibly powerful development, a message to share," said Beales.

Watch the full interview with Danny Beales, head of policy and campaigns at the National AIDS Trust in the UK, in the video player above.

'Life-changing': Revolutionary new HIV drug approved for use in the UK

Argentine woman may be second person to naturally recover from HIV