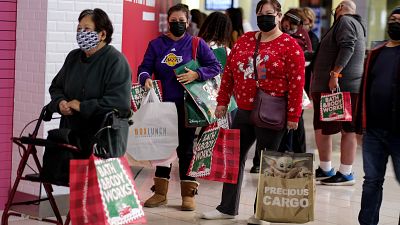 A million-strong army of Reddit users is boycotting Black Friday and in particular the e-commerce giants such as Amazon.

The r/antiwork subreddit exploded during the COVID-19 pandemic and went from some 70,000 subscribers in January 2020 to 1.2 million today.

The group was established “for those who want to end work, are curious about ending work, want to get the most out of a work-free life”.

But it now says it is to support those who want to support the “hospitality and retail sectors” during the Black Friday/Cyber Monday sales period.

The thread, which is urging people to take a stance against Black Friday, read: “These sectors have long been underpaid, underappreciated, and overworked. Workers in these sectors that choose to withhold their labour should do so with the possibility of losing their job in mind.

“In solidarity with these workers, consumers should withhold their purchasing power from employers that choose to open for this day”.

The website is not just anti-over-consumption. It also has graphs showing the increasing gap between worker productivity and salaries in the United States since 1948.

The website also advises if you are “forced to work” to put in “less effort/disrupt”.

“This Black Friday, let’s hurt their bottom line,” u/FOWM_Sterling, wrote in a related post with 68,000 upvotes.

“This Black Friday turn your phone off and spend time with your family. You only have one of them and you are doing this for them. Get organised, boycott places that do Black Friday stuff, be it online or in the store, and stay safe!”

What is the r/antiwork subreddit?

During an era fast becoming known as the Great Resignation, in which employees are quitting their jobs in record numbers, the subreddit has been a forum for workers to vent their gripes.

One post read: “My office has lost 60 per cent of our staff since the start of the pandemic. I am doing the work of 3 people and I was here for 14 hours yesterday.”

Another vented: “Employer told me that if I left to pick up my kid I would be written up. Told them to have the paperwork ready when I got back”.

In the US, employees are quitting in record numbers with 4.4 million leaving their jobs in September alone, according to the US Labor Department.

A survey by asset management company Mercer found that low-wage, frontline, minority and lower-level employees are more likely to want to leave their jobs. It classified a low-level wage as under $60,000 per year (€53,000).

A representative post from the subreddit read: “Unemployment, poverty, famine... They're all part of capitalism by design. We want to abolish work and capitalism. Not reform them. We're leftists.

“We're not liberals. We're anarchists, Marxists, Trotskists, all flavours of the left, and this is our subreddit. We've never been interested in capitalism and will never be”.

How is the EU healthcare sector preparing for the digital revolution?