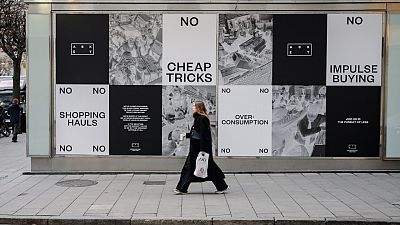 "The biggest issue with fashion, as one of the main contributors to climate change, is overproduction and overconsumption."   -   Copyright  ASKET
By Julie Gaubert  •  Updated: 26/11/2021

Replacing "Black Friday" with "Green Friday", denouncing fake sale scams, boycotting Amazon: these are some of the grievances of groups that denounce the unbridled consumerism of the end-of-year holidays.

In North America and Europe, many online retailers and shops are offering special deals on Friday, the traditional kick-off to the Christmas shopping season.

Analysts at Adobe expect global online spending to reach $910 billion (€805 billion) between the beginning of November and the end of December, an increase of 11 per cent from 2020, despite inflation and supply chain disruptions.

According to the UK price comparison website Money.co.uk, British Black Friday home deliveries churned out 429,000 metric tons of greenhouse gas emissions — the equivalent to 435 return flights from London to New York (or the same weight as 61,308 elephants) last year.

In the face of this spending frenzy, associations and groups of internet users are speaking out against the excesses and absurdities of Black Friday.

Need for a legal framework

Year after year, the leading French consumers association UFC-Que Choisir continues to point out the numerous scams and false promotions of Black Friday.

An amendment to the French anti-waste law associating advertisements for Black Friday or other coordinated commercial operations to deceptive commercial practices was adopted in 2019.

“However, one year later, we are forced to deplore the multitude of advertisements and messages for Black Friday,” the association said.

“Determined to ensure that the law is respected, our association has served formal notice on six online retailers to put an end to their senseless advertising campaigns and the manipulation of prices and promotions”.

The French law provided for a framework for price reductions with a reference price before it was repealed at the end of 2019 due to a ruling by the European Court of Justice.

The lack of a framework has opened up a breeding ground for deceptive practices and scams of all kinds, the association warned.

Black Friday is also vilified for its impact on the environment, including the increase in greenhouse gases caused by overconsumption.

The American sporting goods group REI has also organised the #OptOutside operation for every Black Friday since 2015, closing its shops and encouraging its employees to spend time with family and friends.

As for the slow fashion startup ASKET, boycotting Black Friday is part of its genes. Its Swedish co-founder August Bard-Bringeus wants to show that “it is possible to drive awareness” by closing its online shop and its Stockholm store for a day.

“We can afford to shut down a day or two days or three days,” he told Euronews Next.

“Today, everyone knows about the climate crisis. Maybe not everyone agrees with it or believes in it. That's a different question. But everyone knows about it. And yet we continue to drive have practises like Black Friday that stimulates mindless consumption and overconsumption that accelerate the extraction rate of resources that we know we can't afford. And it's absurd”.

AKSET is making a stand to slow down.

“In a time where constant replacement remains the norm, sometimes the best thing to do, is in fact, to do nothing at all,” it proclaimed in its Out of Home campaign.

Less is more: an educational question

“The biggest issue with fashion, as one of the main contributors to climate change, is overproduction and overconsumption,” Bard-Bringeus added.

“And with that knowledge, the best thing, and the only thing that we can do that actually makes a meaningful difference, is to slow down, to reduce, to produce less, to create fewer and better garments under better conditions, with better materials that will last longer to get more workers out of every individual item”.

You can only find 40 items of clothing in the ASKET’s collection. The Swedish brand has abandoned the concept of seasonal collections, so as to bring forward one permanent collection of timeless essentials.

“Because we're doing fewer items, we can have more sizes to solve the fit issue because even if we sell fewer excess, short and medium, regular does matter. The product is around forever, right?” Bard-Bringeus said.

The best thing, and the only thing that we can do that actually makes a meaningful difference, is to slow down.

“I think, unfortunately, as humans, we are so bad at changing our habits, so we won't change them until things are starting to hurt us. And literally now we can feel it”.

“There's what we say that we want to do and then there is still a gap between intention and what we actually do, as most of us will experience this weekend, during Black Friday. Even the best of us, even the people with the best intentions, will succumb to the deals that they're being bombarded with today”.

“Is it classist or is it elitist to assume that all we need to do is to buy fewer and better things because not everyone has the resources,” he asked.

“And what we would argue is that, no, it is not. It is more of an educational question”.