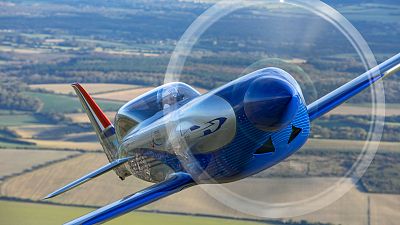 Three world records for electric flight have been smashed by one plane, the British aerospace manufacturer Rolls-Royce has claimed.

The ‘Spirit of Innovation’ became the fastest ever all-electric, battery-powered aircraft earlier this month, hitting a top speed of 555.9 km/h over a distance of 3 km at a test site in the United Kingdom.

Rolls-Royce said it believed the single-seater plane, which only took its maiden flight in September, also became the fastest electric vehicle in history when it hit speeds of 623 km/h during a longer 15 km flight.

It also broke the record for the fastest climb by an all-electric aircraft, shaving 60 seconds off the previous record as it climbed 3,000 m in 202 seconds.

The Spirit of Innovation is powered by a 400 kilowatt electric motor that outputs the equivalent power of a 535 horsepower engine.

Also on board are 6480 battery cells, which Rolls-Royce claims make up the "most power-dense propulsion battery pack ever assembled in aerospace".

The electric plane is part of the Accelerating Electric Flight Project (ACCEL), half of which is funded by the UK government and Britain's Aerospace Technology Institute.

While the claim to be the world's fastest electric vehicle is a technological achievement in its own right, the project also provided data that will feed into the development of future electric passenger aircraft, Rolls-Royce said.

"Following the world’s focus on the need for action at COP26, this is another milestone that will help make 'jet zero' a reality and supports our ambitions to deliver the technology breakthroughs society needs to decarbonise transport across air, land and sea," the company's CEO Warren East said.

The record-setting test runs took place at the UK Ministry of Defence’s Boscombe Down experimental aircraft testing site on November 16.

Rolls-Royce said it had submitted data for the flights to the Fédération Aéronautique Internationale (FAI), the sporting body that controls aeronautical world records, and hoped they would be certified "in the near future".