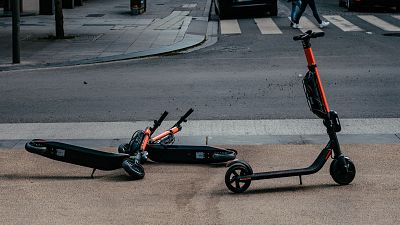 Stockholm is cutting the number of e-scooter companies allowed to operate in the city   -   Copyright  Ernest Ojeh / Unsplash
By Tom Bateman  •  Updated: 09/11/2021

Electric scooters are facing a crackdown by Swedish authorities tired of accidents and problem parking.

Councillors in Stockholm voted on Monday to almost halve the number of rental e-scooters permitted in the Swedish capital, and to cut the number of licensed scooter rental firms from eight to three.

"We have put our foot down and cleaned up the e-scooter jungle," Stockholm's vice-mayor for transport Daniel Helldén said on Twitter.

On-street parking for e-scooters has become a controversial topic in Sweden after a fatal accident in September.

An 80-year-old cyclist in the city of Västerås died after crashing into a scooter that was left parked across a cycle route at the bottom of a hill.

What is Stockholm doing?

Stockholm's new restrictions will see the number of scooters available in the city fall from around 23,000 to just 12,000 on January 1 next year.

The city will also charge companies a fee of around €140 per scooter, which it says is intended to encourage them to take better care of the electric vehicles (EVs).

The three companies that continue to operate in Stockholm will also have to impose parking restrictions, make sure the scooters can reliably stand upright when parked and offer customer service in Swedish, Helldén told the TT news agency.

Despite placing restrictions on the scooters, said he was not opposed to them in principle.

"Electric scooters are used for 60,000 trips a day in Stockholm, so there is a need. This is not about removing them, it's basically a smart mode of transport if users behave," he said.

The Swedish capital is following its Nordic neighbours in restricting the use of e-scooters. Authorities in Oslo imposed a night-time usage ban on the EVs in July, while last month Copenhagen reintroduced them following a total ban in October 2020.

In September, the Finnish capital, Helsinki, imposed a weekend night-time ban on e-scooters and lowered their speed limit after a spate of accidents caused by drunken riders.

A hospital in Helsinki told Euronews Next at the time that it had been forced to hire an additional doctor to cope with the extra burden of scooter-related injuries.

A spokesperson for Sweden-based e-scooter company Voi told Euronews Next that driving while drunk was against the company's terms of service.

"We want to highlight for our users how it's very important for them to understand that alcohol and e-scooters are not a good match, you should never drive while you're intoxicated," she said.

Uber 'far behind' on its promise for more electric cars