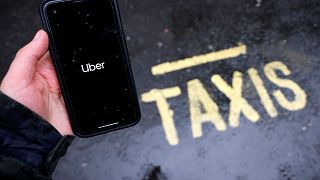 Last year, the ridesharing app promised that by 2025 half of all journeys taken by Uber users in seven European cities would be driven by electric cars   -   Copyright  AFP
By Tom Bateman  •  Updated: 03/11/2021

Uber's pledge to make cab journeys in seven European capitals emissions-free is "far behind" schedule, a new report by an environmental think tank has found.

Last year, the ridesharing app promised that by 2025 half of all journeys taken by Uber users in London, Paris, Amsterdam, Berlin, Brussels, Madrid and Lisbon would be driven by battery electric vehicles.

But data provided to NGO Transport & Environment (T&E) by Uber show that less than 5 per cent of distance covered by the app's users in the seven cities occurs in an EV.

However, the figures also showed that between January 2020 and June 2021 the distance driven by EVs working for Uber almost tripled, from 1.54 per cent to 4.08 per cent, T&E said.

The data also revealed that there are vast differences among the cities themselves. In Lisbon, EVs account for 9 per cent of Uber journeys by distance. In London and Amsterdam they cover 6 per cent.

By contrast, just 0.01 per cent of Uber trips in Brussels took place in an electric car.

The difference can be explained by local government policies in the cities, said T&E's electric fleets programme manager Saul Lopez.

"Uber should be doing more but so should governments. In Amsterdam and London it’s cleaning up its fleet faster because the authorities have set up electrification mandates and effective ultra low emissions zones," he said.

Cleaning up the Uber fleet is complicated by the fact that the vehicles the company's passengers ride in are purchased by the drivers themselves.

In an attempt to encourage its London-based drivers to switch to electric, Uber announced on Wednesday that they would be able to buy Teslas as part of an incentive scheme to boost EV use.

The scheme, introduced in 2019, collects £0.03 per mile (€0.06 per kilometre) for every trip taken within the British capital and adds it to a fund that a driver can put towards the cost of a new EV.

Over 4,000 Uber drivers have switched to driving EVs in London, giving the company more fully electric cars there than in any other major global city.

"There is still a lot of work to do to drive a green recovery and clean up urban transport, but the progress we are seeing in London is significant and as a city we are leading the way globally," said Uber's Northern and Eastern Europe boss Jamie Heywood.

Governments can do more

While Uber and its competitors Lyft, Bolt and Free Now have all made similar pledges to cut emissions, local authorities need to do more to encourage the shift to electric, T&E's Lopez said.

"The deployment of charging infrastructure is too slow and is not taking place where it is needed, and local regulations lack teeth - low emission zones are too permissive, and plans to make them more stringent are way too far in time," Lopez told Euronews Next.

"Cities should look at Amsterdam for inspiration. All taxis and private hire vehicles there must be zero emission by 2025, and an on-demand curbside charging infrastructure deployment programme ensures that charging stations are installed where they are needed, not in highly visible locations in city centres that are underutilised," he said.

Sweden cracks down on electric scooters