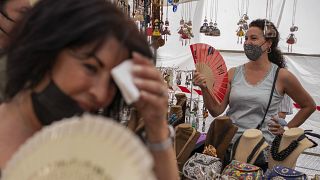 Cities around the world are heating up, causing increased demand for cooling   -   Copyright  Andrea Comas/AP Photo
By Luke Hurst  •  Updated: 04/11/2021

Some cities could be 4C hotter by the year 2100 if emissions continue at current rates, the UN has warned.

The ‘heat island effect’ that can be seen in cities is caused by diminished green cover, heat trapping materials used in urban environments, and heat waste from human activities.

With the COP26 climate summit underway in Glasgow, the UN Environment Programme (UNEP) has published guidance on how to counter the heating up of our cities, which it says will be crucial in the fight for the goals of the Paris climate agreement.

How rising demand for cooling is making cities hotter

According to the World Health Organization (WHO), the number of people exposed to heat waves jumped by 125 million between 2000 and 2016.

This is especially prevalent in cities, which due to the energy demands of big populations and their infrastructure, can become heat traps.

Heatwaves can obviously have an adverse effect on human health, with higher mortality rates observed in places where temperatures exceed 35C.

But they also take their toll on economies. With higher temperatures, productivity can drop and work days lost to ill health increase.

Warming cities present something of a Catch-22 situation. The increased demand for cooling systems such as air conditioning increases demand on the power supply.

This results in higher greenhouse gas emissions and waste heat from power generation.

In its guidance, the UN says that household spending to cool down indoor spaces already accounts for between five to 15 per cent of the median income in many parts of the world.

The Sustainable Cooling Handbook for Cities

The UNEP’s handbook, published amid the ongoing COP26 summit, outlines solutions to the issue of heating cities - solutions that have already been put into practice around the world.

Among the ideas are ensuring planning requirements in cities include a minimum area and distribution of green or blue spaces, increased ventilation and waste heat management, street trees, cool and reflective surfaces that stop the absorption of heat, and using buildings to add shade to key public areas.

The handbook highlights examples of methods used around Europe to fight overheating in cities.

Paris has had an innovative city cooling system since 1991. Offices, banks, stores, hotels, museums and other buildings are cooled using water from the Seine River. When the water temperature is below 8C, water is distributed through cooling towers. During the night when demand for cooling is lower, thermal energy is stored as either chilled water or ice which is then used during the peak hours of the day. According to a study, this has the potential to decrease peak power for cooling by 15 to 50 per cent.

Ljbuljana launched an ecological zone in 2007, closing over 10 hectares in the city centre to motor vehicle traffic. Major roads were made more pedestrian friendly, walking and cycling were promoted and free electric taxis were provided for tourists and mobility-impaired residents. In the rest of the Slovenian capital, public transport was modernised and bus lanes introduced resulting in a reduction in air temperature and pollution.

Barcelona’s so-called “superblocks” have been hailed as a green success in city planning. Since 2016, six groups of city blocks in the Spanish city’s Eixample district have been repurposed to minimise traffic and make the space available for community use. The city now plans to convert 21 streets and 21 intersections in the same district between 2022 and 2032, representing one in three streets in the neighbourhood. Air quality and safety are expected to improve as a result.

Extreme heat is 'getting worse and worse', experts warn