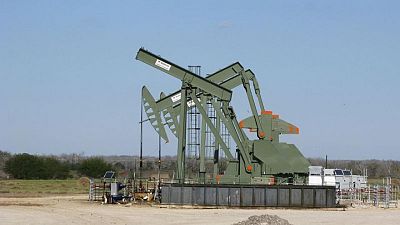 The bigger-than-expected rise in U.S. crude stocks gave some investors an impetus to unload long positions after strong gains in recent weeks brought both the Brent and U.S. crude benchmarks to multi-year highs.

“We’ve had a reasonable pullback on profit-taking more than anything, but still $80 for (WTI) is a strong number,” said Gary Cunningham, director of market research at Tradition Energy.

Both benchmarks closed on Friday with a seventh straight weekly gain as major producers hold back supply and demand rebounds after the easing of pandemic restrictions.

Crude oil inventories rose by 4.3 million barrels last week, according to the U.S. Energy Department, more than the expected 1.9 million-barrel gain. Gasoline stocks dropped by 2 million barrels, lowering them to levels not seen in nearly four years, as U.S. consumers grapple with rising prices to fill their vehicles’ tanks. [EIA/S]

Storage at the WTI delivery hub in Cushing, Oklahoma, is more depleted than at any point in the past three years, with prices for longer-dated futures contracts pointing to supplies staying at those levels for months.

Oil has advanced of late on the expectation that nations like China and India will respond to shortages in coal and natural gas by switching to crude-derived products for power generation and heating. Such demand could boost overall crude consumption by more than half a million barrels of oil a day.

Cunningham said that expectation may be overstated, however, depending on the state of the global economy.

“There was such a rally in natgas that there was a lot of concerns about generation assets being shifted back to oil-based generation – that was a big part of the rally and now some of that is easing a bit,” he said.