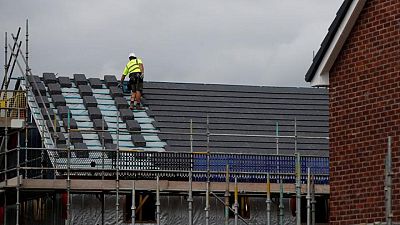 -Barratt Developments expects home completions to rise to pre-pandemic levels in its fiscal year to June, Britain’s largest housebuilder said on Thursday, also flagging a 4-5% rise in construction costs in what is a vibrant property market.

The cost warning, accompanied by investor disappointment over the lack of special dividend, sent its shares 3% lower to the bottom of the blue-chip index, despite a 65.1% earnings surge for the year ended June 30 that was in line with forecasts.

The UK market has been underpinned by a temporary tax break for homebuyers set in place during the COVID-19 crisis, and prices unexpectedly bounced back strongly in August after a fall the month before when the break began to be phased out.

Barratt – which had guided to build cost inflation of 1-2% in the previous year – said selling prices were rising faster than costs, helping its gross margin grow to 21% from 18%, though still below the 22.8% posted in the pre-pandemic year to June 2019.

It declared a final dividend of 21.9 pence per share, but some analysts were expecting a special dividend announcement after the company in February said it continued to target full-year cover of 2.5 times.

“Our main focus is on buying land and growing our business. That is what we wanted to tie our financial resources to,” Chief Executive Officer David Thomas told Reuters when asked about the lack of a special payout.