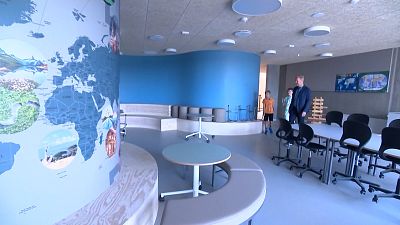 Denmark hopes to innovate its educational system by opening up a new kind of school in Varde, focusing on curiosity and creativity.

Frello School, named after local Danish artist Otto Frello, will soon be home to 900 young pupils and has a particularity: the school was designed with neither classrooms nor desks.

Instead, the school possesses special "subject rooms" for each discipline.

"The pupils will never be in doubt as to what they have to work with. The rooms are clearly modelled after each individual subject," principal Morten Moeller Jensen said.

The school's architecture uses materials such as stone, wood, and thermal wood by the entrance, 'subject areas', and roof gardens, to create a welcoming and playful environment for students.

The city hopes children will feel at home while keeping up with the times.

"What this gives us is a school secured for the future. Had we used €12 million on an existing school, we would have had the same content without the possibility of adding new things," said mayor Erik Buhl.

"Moreover, it is extremely important that we keep looking 30-40-years ahead instead of just one election period ahead. Something, I think we need to practice doing in the public sector," he added.