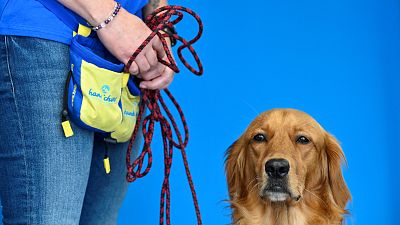 Pokaa, the golden retriever is pictured at La Roselière nursing home in France where she has proven adept at detecting COVID-19.   -   Copyright  AFP
By Aisling Ní Chúláin  & AFP  •  Updated: 10/08/2021

Just a month after beginning his training in the detection of COVID-19, Pokaa the golden retriever has taken up his post in a nursing home in the eastern Alsace region of France.

Rather than forcing an intrusive swab up people’s noses, Pokaa needs only to sniff a cloth that has been held under a resident’s armpit to deduce whether or not they have the virus.

So far, he has managed to rack up some impressive results, enjoying a 100 per cent success rate detecting COVID-19 in symptomatic residents and 94 per cent in asymptomatic cases.

“If Pokaa detects a positive swab, he sits in front of the cone, he really holds his position and he can be very insistent on his marking,” Pokaa’s trainer, Christelle Schreiber, said.

“If he detects a negative swab, he'll smell it, or very quickly ignore it, and come back to me and say there's nothing there,” she added.

Once the dog detects the disease, a PCR test is administered to confirm the diagnosis and the patient is isolated from other residents of the home.

Crucially, Pokaa has proven adept at sniffing out the virus up to 48 hrs before it is picked up by a CPR test.

“We were able to verify that people who were negative 48 hours before the PCR test, and were detected positive by the dog, actually had a positive PCR test 48 hours later," Alain Legrand, director of the Handi’chiens association where Pokaa received his training, explained.

I believe that our dogs, I truly believe this from the bottom of my heart, our dogs will save lives in institutions. The people we take care of are fragile, with multiple diseases, and despite the vaccine, they can still be affected by the virus. And it's these people that we have to really protect.

Dogs are usually trained by Handi’chiens to provide assistance and company to people with disabilities.

But the pandemic inspired the charity to put the canine’s keen sense of smell to good use in the fight against COVID-19.

"I believe that our dogs, I truly believe this from the bottom of my heart, our dogs will save lives in institutions,” said Robert Kohler, director of La Roselière nursing home and president of Handi'chiens.

“The people we take care of are fragile, with multiple diseases, and despite the vaccine, they can still be affected by the virus. And it's these people that we have to really protect".