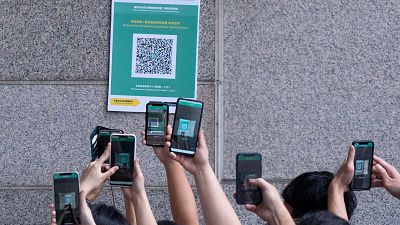 Coronavirus contact tracing apps have been rolled out across the world but experts say they have not been as successful as hoped and it’s not the fault of the technology they use.

A new study has revealed data privacy concerns have stopped people using the apps, limiting their effectiveness. But this is not the only issue the apps have faced, and a wider debate on our freedom to use them has ensued.

“While accepting that their personal data are under the control of internet companies, most citizens seem unamenable to sharing their data for the public interest,” the study said.

How do COVID apps work and how secure are they?

The apps employed by many governments can tell us if our phone has been in close proximity to the phone of someone who has tested positive for the virus. The more users, the higher the chance it will help people self-quarantine and prevent the spread of coronavirus.

A study by the University of Oxford said that for apps to be effective, 60 per cent of a country’s population would have to use them. However, it also said a figure lower than this could also be effective.

Currently, data on what percentage of populations are using contact tracing apps is scarce. But the study published by VoxEU and CEPR said in 2020 just 26.6 per cent of people in Australia were using them, 26.3 per cent in Ireland, 21.7 per cent in Germany, around 16.2 per cent in Italy, and just 3.3per cent in France.

As for privacy, Europe has been cautious from the outset and tried to tackle the core issue.

At the beginning of the pandemic, the European Commission aimed to set up a legal framework to define the requirements for the development of the apps.

EU member states’’s apps work in line with the Commission’s strict guidelines on data protection, and they are based on a joint technology standard from Apple and Google which logs close contacts securely on the device.

it's not a success not just because of privacy, not because of the tool, but because of the missing focus on the systemic dimension." Margherita Russo, Professor of Economic Policy at the University of Modena and Reggio

The study was led by Margherita Russo, Professor of Economic Policy at the University of Modena and Reggio. She formerly represented Italy on an Organisation for Economic Co-operation and Development working group focused on technology policy.

She told Euronews Next privacy was not the only reason the apps had not taken off.

According to Russo, our individualistic society becomes something of a problem when dealing with a global threat like COVID.

“Society is something that must be addressed when you have to focus on solutions for a pandemic,” she said.

“If your country has not done enough in that direction, it has to do something else and perhaps it has to create conditions for people to accept that.”

Russo said that a major reorganisation of society is “not something that can be addressed out of the blue during the pandemic”.

Instead, she said social awareness should be built well before and during this type of global health emergency.

But in England and Wales, COVID-19 tracing apps have worked a little too well, reportedly leading to users switching off notifications for the app or their bluetooth.

The mathematical model isn't enough if you have no health system able to analyse and manage the data.

Margherita Russo
Professor of Economic Policy at the University of Modena and Reggio.

For the week to July 21 a record was set when almost 700,000 alerts were sent by the app, telling users to self-isolate. This caused staffing issues in many industries including hospitals and food distribution.

The COVID-19 app in England and Wales is now being tweaked so that it will look for contact cases two days prior, instead of five.

Poor use of data

For COVID-19 tracking apps to work effectively to stem the spread of the virus, health care systems need to do something with the data they produce. Australia and Italy integrate the data with the local health system, while in New Zealand, South Korea and Russia, the central government manages the information directly.

According to the study, many countries’ health systems were ill-equipped to act on the vast streams of data produced.

“The mathematical model isn't enough if you have no health system able to analyse and manage the data,” said Russo.

In the northern Italian region of Emilia-Romagna, where Russo lives, implementing the data was a serious problem, she said. This was due in part to health systems being overwhelmed by the day-to-day of the pandemic, but also because many could not afford to.

“I arrived at the conclusion when we describe a policy recommendation that we have the idea that there are some general solutions that work in any context. But that's not the case,” she said.

“But who has to do that? What is the cost of integrating data? And is that integration feasible in an emergency situation?”

This is vital to building trust among the public, giving them a reason to use such tracing technology, she said.

How much governments are investing in information campaigns for COVID tracing apps is also a factor in their success. But such data for the countries in the study was not available. Data was only available for Italy, where the information campaign fell apart in the autumn of 2020 as infections soared.

The study found this coincided with opposition parties taking a stance against the apps and vowing not to download them.

Governments have also played a key part in selecting the companies that build the apps.

The development of the French COVID app was led by the state institute Inaria with the support of a coalition of French companies, notably the French telecoms giant Orange. Meanwhile, Italy’s government launched an open call for companies to work on its app development and went with Milanese tech start-up Bending Spoons.

But how much governments invest in public funds for the maintenance and use of tracing apps is also barely documented. The study found only Germany was the only country to provide out of the nine it studied to provide this data.

Russo said this lack of transparency creates a democratic oversight.

“It must be transparent and maybe dimensions and resources devoted to policy should be there and be questionable but they're not,” she said.

Who are France's anti-vaccine rule protesters and what do they want?