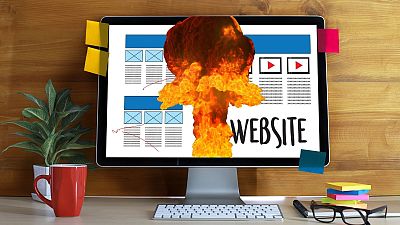 Screaming into the void is so 20th century. Now you can simply pour your thoughts into an anonymous, potentially self-destructing website to be read by strangers who you’ll never meet. Sound good?

ThisWebsiteWillSelfDestruct.com is a simple concept. If no one posts a message for 24 hours, the website will self-destruct, wiping itself from the internet automatically.

However, it doesn’t look like that will happen any time soon. After launching in April 2020, it received over 200,000 genuine messages in its first year.

The site’s birth coincided with the first wave of the COVID-19 pandemic. Having a place where people could vent their feelings anonymously was apparently much needed.

Visitors to the site can read the messages left by anonymous users, which are often intensely personal. People discuss their crushes, talk about their hidden sexualities or simply express how afraid they feel in the world at the moment.

"Dear Website, I’ve had a crush on my friend for four years. I know I shouldn’t tell her though because she’s straight and I’m also a girl. I don’t want to ruin our friendship since we are already so close," one user wrote.

Another said: "Dear Website, sometimes I feel like I'm never enough. The feeling never goes away and I'm tired".

However, for every dark thought, there are lighter messages from people talking about their crushes or their everyday lives. Clicking the site’s “read a message” button can send you on a randomised journey through the vast palette of human emotions.

The messages are not only written in English, they come from all over the world and in many languages.

ThisWebsiteWillSelfDestruct.com is run by just one person, known as FemmeAndroid. The idea was born when she took part in a game jam, a contest where participants have a short time to make a video game from scratch.

"The theme was Keep it Alive," FemmeAndroid said in a post on her Patreon. "I made the first version over four hours before bed. I posted it, I went to bed, then I wondered if it would last until the end of the judging period".

When she woke up the next morning, there were 20 posts. After doing a few errands, there were 100 posts. The site suddenly blew up (not in a self-destructive way) after being featured on the popular "Internet is Beautiful" subreddit.

While FemmeAndroid was delighted by this unforeseen success, it also brought downsides.

As an anonymous website where people post personal thoughts, the site attracted a large number of trolls. After it went viral, FemmeAndroid stayed up all night trying to moderate her site’s content.

The site also attracted personal abuse directed at its creator. FemmeAndroid is a trans woman who keeps her face off the internet as she transitioned during the pandemic and is not yet out at work.

Despite limiting the amount of information about herself published online, ThisWebsiteWillSelfDestruct.com received a large number of transphobic messages.

One incident stands out among all the rest, however.

"There was a trending Reddit post in a local American city about a possible threat to a mall that was posted through ThisWebsiteWillSelfDestruct.com," FemmeAndroid recalled.

"The title of the website made the threat all the more sinister. People were concerned, and a few mentioned calling the local police, and said that the police were investigating," she wrote.

"I like to be up front when it comes to this kind of thing, and called the police myself, and explained the situation. We had a nice chat, and I gave them all the (limited) information I could".

The threat was a hoax, and for now ThisWebsiteWillSelfDestruct.com carries on.

It experienced another surge in posts recently after going viral again on TikTok and Reddit, showing that the desire to share secrets is as strong in 2021 as it was in the early days of the COVID-19 pandemic.

The site’s users continue to talk about their deepest desires, play word games with, and uplift one another. Then perhaps one day there will be a 24-hour silence and the whole thing will be gone, leaving not a trace behind.