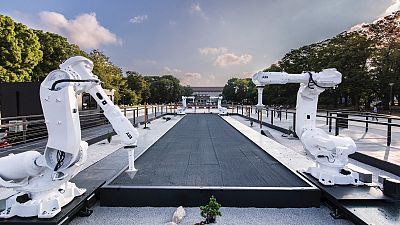 Japan's zen gardens were traditionally tended by Buddhist monks, who transformed the simple art of raking pebbles into an act of meditation.

This one is made by robots.

Created by British artist Jason Bruges, "The Constant Gardeners," features four large industrial robotic arms that work together, constantly making and remaking a zen garden of intricate patterns for the duration of the Tokyo Games.

The patterns the robots trace are generated by a bespoke AI computer programme that analyses video footage from the Olympic and Paralympic Games, tracking the position of athletes' limbs and simplifying their movements to create unique designs.

"We have these performers, the choreography is live and it's improvised from this data feed," Bruges told Euronews Next.

The robotic "gardeners" - each about two metres tall - came to Tokyo's Ueno Park after ten years working in a BMW car factory in the United States.

While they might be outdated, the software driving them isn't. The technical team behind "The Constant Gardeners" uses 3D graphics programmes like Cinema 4D and the Unity engine – more commonly put to use building blockbuster games like Apex Legends and Valorant – to build models that the robots replicate.

Getting from athlete to robot

The process of tracing the patterns begins in London, where a team selects video clips of an athlete's performance and feeds it in to a bespoke software environment that converts key motions into a CSV file of data points.

"For each line, or each curve, you basically have the points X,Y, Z, and they all have a different curve ID," said Dominik Zisch, Jason Bruges Studio's senior creative technologist.

Once the curves – the individual movements each robotic arm has to make to create a given image – have been identified, the whole batch has to be shared out among the four robots.

"For me the most challenging bit was, we've now got each individual line for each of the four robots, and I now need to somehow merge all that together in a way that they don't crash into each other," Zisch told Euronews Next.

The software driving the robotic artists – which the studio believes to be a world-first – is continually evolving.

"At the moment we're doing it manually, but we're also starting to build a programme where they'll clean the surface as well," Bruges said.

Eventually, it could be possible for the entire art installation to run autonomously.

"We're having quite a big input in what looks nice, what doesn't look nice, but we could leave that. It could be very generative and we could essentially breed, in the software, different outcomes," he added.

A 25-year-old Tokyo resident who stopped by to see the artwork said he was intrigued by the robots' "human-like" movements, unlike regular machines designed to work at high speed.

"I don't get bored by looking at them. They look almost human and I find them cute," Masato Ito told AFP.

The robot scientist searching for a COVID-19 cure