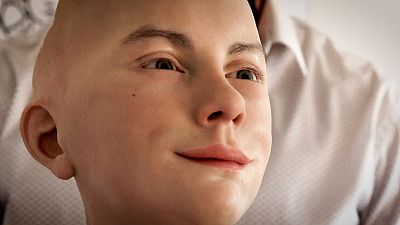 Abel may look like a normal child but he is anything but.

The humanoid robot is the fruit of a collaboration between bioengineers at the Pisa University and Gustav Hoegen, an FX artist from London company Biomimic, which specialises in realistic animatronics.

Specifically designed to have the build and features of a 12-year-old boy, his developers are hoping to increase what they refer to as his ‘relational potential’.

He has also been equipped with technology to assess human emotions by analysing parameters such as voice frequency, thermal changes on the skin visible in infrared or heartbeat frequency.

The goal for this project was to create a robot that could serve as a companion to people with autism or Alzheimer's.

We want to know if a machine can help someone maintain a healthy condition, not just physically but also mentally and emotionally

"When we face this kind of machine we often talk about empathy, it would be more correct to talk about emotional intelligence, a peculiarity of proper human beings - the skill to understand how people in front of us we are feeling," explained Lorenzo Cominelli, a researcher at the Centro Enrico Piaggio at the Pisa University.

“We want to know if a machine can help someone maintain a healthy condition, not just physically but also mentally and emotionally,” he added.

“This is particularly important in some branches like autism spectrum disorder or behavioural and social disorders, or even in those subjects who show a neuro-cognitive degeneration like Alzheimer's".

At present, Abel relies on external sensors attached to the subject but the next stage of the robot’s development hopes to integrate the sensors into the robot itself.