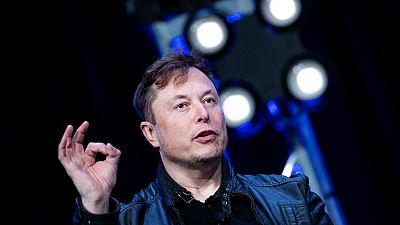 Tesla's current run of eight profitable quarters in a row wouldn't have been possible without the sale of carbon emissions credits to other manufacturers. This is the first time the company has been profitable even without credit sales since October 2019.

Analysts had predicted the company would take about $11.3 billion (€9.59 billion) in revenue during the last quarter, according to market data firm Refinitiv.

"Tesla impressed with its numbers, as most of its revenue came from vehicle sales,"said Jesse Cohen, senior analyst at Investing.com.

The record quarterly profit came despite some setbacks: Tesla reported a roughly €20 million loss in its Bitcoin holdings, while sales of regulatory carbon credits also fell.

This is in part due to rival carmakers stepping up their own EV production efforts. Fiat and Peugeot owner Stellantis expects to meet its European carbon dioxide emissions targets this year without using environmental credits bought from Tesla.

US regulations in some states require car makers to produce a certain quantity of "zero-emissions" vehicles, handing out regulatory credits as an incentive. As Tesla only manufactures electric vehicles (EVs), it always has more of these credits than it needs and can sell the excess to other carmakers.

The company said production on the Semi truck would now begin in 2022. Production of the Model Y was still on track to begin in Texas and the company's first European manufacturing base in Berlin this year, Tesla said.

Speaking on a call with investors and analysts on Monday, Tesla CEO Musk did not give a timeframe for when Tesla will start mass production of its new-generation batteries and the much-anticipated Cybertruck.

"It is difficult to say when the last of the technical challenges will be solved," he said, referring to the company's 4680 battery cells which are slated for use in the forthcoming Cybertruck.

Tesla has a backup plan of using its existing 2170 batteries, Musk said, adding that its battery cell suppliers would double production next year.