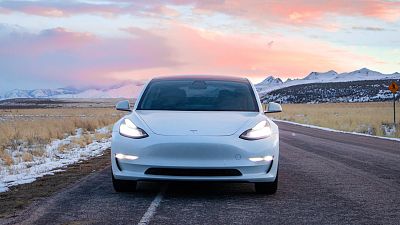 Some early adopters of Tesla cars are calling out the company for charging them extra - as they see it - to use self-driving features   -   Copyright  Unsplash / Taun Stewart
By Tom Bateman  •  Updated: 21/07/2021

Electric car manufacturer Tesla has lowered the cost of a computer upgrade for its vehicles following an outcry from owners of older models.

The company announced the $1,500 (€1,270) "Hardware 3.0" upgrade alongside a new subscription pricing model for its so-called Full Self-Driving (FSD) package.

Tesla vehicles built since mid-2019 have had the Hardware 3.0 computer included, meaning owners of older vehicles running the company's Hardware 2.0 or 2.5 were expected to pay out for the upgrade.

Critics of the move say Tesla vehicles have been advertised as having the hardware necessary for FSD since at least 2016.

An article published on Tesla's website on October 19 of that year states that "as of today, all Tesla vehicles produced in our factory – including Model 3 – will have the hardware needed for full self-driving capability at a safety level substantially greater than that of a human driver".

Tesla owner Kyle Maynard bought his Tesla Model 3 in December 2018. His car currently features Tesla's older-generation Hardware 2.5, meaning he would need to pay for an upgrade to access the vehicle's FSD features.

Maynard told Euronews Next he felt early supporters of the company were being unfairly punished by the move.

"We bought when it wasn't clear Tesla was going to survive and now people get the correct hardware in their car at no extra cost," he said.

Tesla, which was founded in 2003, had a market capitalisation of roughly €52 billion in December 2018. In July 2021, the company's stock is worth over ten times that amount at around €540 billion.

"I think it changes my mind a little bit. They were struggling and couldn't afford to be generous. Now they're pretty flush and the Model 3 is a big part of that," Maynard said.

"Would be nice to help out early adopters of their biggest product".

Is subscription the future?

The company may have had a change of heart. On Tuesday, it was reported by industry website Electrek that some Tesla drivers in North America were being offered a lower hardware upgrade price of $1,000 (€850).

Euronews Next asked Tesla to comment on the pricing decision but did not receive a response.

The company reportedly shuttered its press office last year, according to internal sources.

Despite the bumpy start, some experts believe Tesla's subscription pricing model could prove a financial success.

A note published by investment analysts Morgan Stanley on Tuesday stated that "it is possible that the value of Tesla's recurring software revenue may exceed the value of its hardware business".

The firm also expressed surprise at the cost of Tesla's FSD monthly subscription package, calling the $199 (€169) fee "substantially higher than we would have expected".

Tesla's claims over autonomous driving have previously landed it in hot water in Europe.

In July last year, a German court in Munich banned Tesla from including the terms "full potential for autonomous driving" and "autopilot inclusive" in its German marketing campaigns.

Tesla Autopilot was literally named after the term used in aviation. Also, what about Autobahn!?

According to the Reuters news agency, the court said that such claims were misleading and risked giving customers the false impression that Tesla's cars were both capable of fully autonomous driving and that such a system would be legal to use in Germany.

FSD is not currently available in Europe after the European Commission found the company's self-driving technology did not comply with regulations last year.

EU lawmakers back ban on new combustion engine cars from 2035