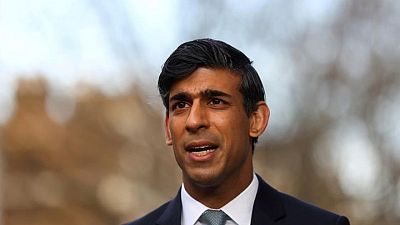 LONDON -Britain’s finance minister pledged on Thursday to “sharpen” the competitive advantage of the UK financial services sector as he set out his vision for its future after the City of London lost business to the bloc after Brexit.

In his first Mansion House speech, traditionally an annual address given by the Chancellor of the Exchequer in the City of London financial district, Rishi Sunak said Britain’s departure from the European Union was a unique opportunity to tailor rules while maintaining high regulatory standards and open markets.

Brexit has largely severed the City’s ties with investors in the EU, triggering a shift in over 7,500 financial jobs from London to new hubs in the bloc, with Amsterdam leapfrogging London to become Europe’s biggest share trading centre.

Last year the finance ministry rolled out reviews to listings rules, fintech and insurance capital rules, and on Thursday it announced there would be further public consultations on financial reforms.

Sunak’s ministry set out plans to change a slew of rules inherited from the EU, which could make Brussels think even harder about granting any direct City access to the bloc due to inevitable differences emerging in hitherto identical rules.

Britain said it plans to scrap curbs on “dark” or off exchange trading favoured by big investors wanting anonymity but distrusted by EU regulators.

Rob Moulton, a lawyer at Latham & Watkins, said it was clear the UK was unafraid to diverge from EU regulation and “may be seen in Brussels as an attempt to promote the City and walk away from common standards”.

Sunak said there will be new sustainability disclosure requirements for companies to report on the impact they have on the environment, a step the EU has already taken.

To date, sustainability disclosures look only at how climate change affects a company’s financial performance. Sunak will publish more details before the U.N. COP26 climate conference in Glasgow in November.

Miles Celic, CEO of TheCityUK which promotes UK financial services abroad, said there was a need to ensure a compelling proposition for Britain to remain a world leading financial centre.

“This includes simplifying our regulatory regime while maintaining its quality and strength, providing certainty and clarity with a business tax roadmap, and enhancing efforts to attract and retain the talent we need,” Celic said.

The financial sector was largely left out of Britain’s trade deal with the EU, cutting lucrative ties with investors in the bloc, and the industry wants a government strategy for the City.

The EU has yet to decide how much direct access it will grant the City in future, while trying to engineer a shift in clearing in euro derivatives from London to Frankfurt.

Sunak said while EU access for the City “has not happened”, the bloc would never have cause to deny Britain access because of poor regulatory standards.

“So I see no reason of substance why the UK cannot or should not continue to provide clearing services for countries in the EU and around the world,” he said.

Petr Wagner from the European Commission’s international affairs unit told the Investment Association’s annual conference that the EU does not want to “put up a wall” and wanted to deepen its own capital market.

Sunak said Britain could take a more nuanced approach to serve the fast growing Chinese financial services market of 40 trillion pounds while still taking a “principled stand on issues we judge to contravene our values”, a reference to human rights.

He said Britain wanted to deepen ties with the United States and would establish a “ground-breaking” system of cross-border access for the sector with Switzerland. Such access based on non-EU member Switzerland and Britain recognising each other’s financial rules was rejected by Brussels.