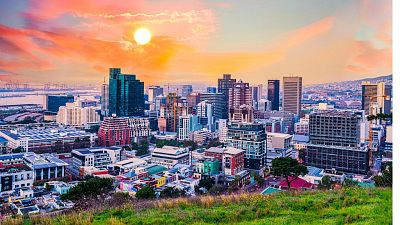 Cape Town. Community engagement projects are helping the city transition to renewable energy  sources   -   Copyright  Canva
The opinions expressed in this article are those of the author and do not represent in any way the editorial position of Euronews.
By Lauren Sorkin  •  Updated: 06/12/2021

To solve the climate emergency, city investments in green infrastructure that deliver social and racial equity are the pathway to impact at scale.

The Glasgow Climate Pact urges action, but days on from the end of COP26, the question is how do we ensure results? The answer is to empower and invest in our city systems.

In the body of the Glasgow Climate Pact, the 197 signatories to the agreement emphasise the urgency of scaling up action, “including finance, capacity building and technology transfer, to enhance adaptive capacity, strengthen resilience and reduce vulnerability to climate change in line with the best available science, taking into account the priorities and needs of developing country Parties”.

As centres of population, culture and economic activity, cities are the ones to deliver. Their importance is only going to grow as migration and urbanisation trends continue and more people move to cities to live and work. The UN predicts that by 2050 nearly 70 per cent of the world’s population will live in cities, up from 55 per cent in 2018.

This growth is largely happening in emerging markets, with cities in Asia-Pacific and Africa predicted to grow by 52 per cent and by 50 per cent respectively.

We therefore need to focus efforts on sharing best practices and mobilising multi-city investments across developed and developing cities alike.

While technologists race to invent new energy and emissions reduction solutions, we owe it to our vulnerable communities to invest in scaling up the existing practices that cities have proven to be effective in keeping people safe.

Reducing emissions isn’t enough to keep us safe from the climate emergency. What’s also essential is building up urban resilience to the changes that are already baked into the earth’s climatic system plus other disruptive events in cities – such as pandemics, for example.

Urban resilience goes beyond putting in place infrastructure and projects that can withstand extreme weather and other shocks and stresses. Instead, it’s primarily about improving the institutions – which are made up of people – and the services that support city residents every day.

So, resilient infrastructure projects must be designed to meet the needs of communities and people while delivering towards net zero goals.

This means incorporating measures of social equity – including job creation and access to health care – and racial equity as an essential part of everything we do.

Without prioritising and addressing social and racial equity, cities will never be resilient. Instead, cities will constantly be in recovery mode, caught in a never-ending cycle of damaging, disruptive and costly events that they strive to get over, only to be knocked back again.

In R-Cities’ 2021 global survey of Chief Resilience Officers (CROs), many cities identified equity as their core resilience building challenge. Close to half (46 per cent) of CROs responded that resilience in their city was about advancing social equity and inclusion.

Leadership for resilient cities and a resilient society

According to Houston Mayor and Chair of the R-Cities Board, Sylvester Turner, “Cities can drive the actions, partnerships and investments necessary to become resilient. Cities are seeking a new way to evaluate infrastructure investments that prioritises social and racial equity and makes transparent the immediate and long-term benefits to people.”

Resilience is the opportunity for city leaders to reinvigorate the city economy at a neighbourhood, citywide and national level, create new jobs, and improve quality of life.

This is not just theory, but an effective practice in many cities around the world who have developed their own resilience strategy. There are a number of successful projects demonstrating results beyond expectation.

The Sunnyside project in Houston, Texas that now provides enough renewable energy to power up to 5,000 homes and will also take an estimated 120 million pounds of carbon out of the air each year.

The project has created jobs and is set to transform a low-income community bringing in USD $70 million (€61.7 million) in private investment.

Houston city leaders reimagined this space in an underinvested community with social and racial equity as a central and critical component of the site redevelopment. City leaders and their private sector partners involved the local community in the design and development of the project’s site.

This included modelling the long-lasting impacts of health and economic growth in the community, connecting training and education programs with the jobs created onsite; and ensuring the site would be accessible to workers using a range of modes of private and public transport.

Sunnyside Solar Farm is an example of a resilient, climate-ready infrastructure project that has created green jobs, benefited its surrounding community, and is also advancing racial and social equity. It provides a blueprint for other cities around the world to follow for their own resilient infrastructure projects.

## Community engagement in Cape Town to transition to renewable energy

In South Africa, the city of Cape Town’s journey to transition toward an energy secure and carbon neutral future has involved significant community engagement.

The city has invested in a number of initiatives to bring residents along in both imagining and building the city’s energy future, including through activities such as community festivals, student and professional competitions, handbooks, interactive platforms, video resources, and public talks.

This investment is an effort to shift energy usage to emerging renewable sources that solve the problem of blackouts, lower costs, promote local economic development, and also address concerns about rising emissions. Results so far are positive and show a decrease in overall electricity demand across the city.

Cities around the world are already making significant gains in creating create safe, sustainable communities for their citizens that can withstand the disruption and hazards caused by climate change and other crises. The challenge now is to provide the extra capacity building and financing to enable cities to go further.

City leaders must continue to advance from theory to action by embedding equity into infrastructure development. This is what our RIDE Scorecard, recently released at COP26, offers by measuring a proposed infrastructure project’s impact on social cohesion, community engagement, and benefit to marginalised populations, among other factors.

Cities need the private sector to join this effort to elevate equity in resilience building in a meaningful way by contributing finance and, importantly, expertise to developing and delivering feasible projects.

National governments also have a part to play, by putting in place nationwide frameworks of minimum risk and resilience standards to support their cities.

This combination of cooperation between the public and private sector and between municipal and national governments is vital for the world’s cities to achieve their twin goals of net zero emissions and keeping their communities safe, equitable and economically viable through resilience.