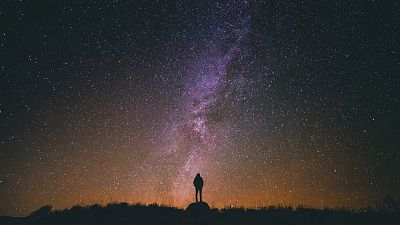 Out there: Swiss researchers say their technique could be a more reliable way of detecting alien life.   -   Copyright  Greg Rakozy - Unsplash
By Tom Bateman  •  Updated: 21/06/2021

Scanning alien worlds for signs of life is a sci-fi trope up there with faster-than-light travel and setting phasers to stun.

But it could become a reality, according to a team of researchers from the University of Bern in Switzerland who have pioneered a technique that uses reflected light to spot living organisms.

Current methods of searching for alien life centre on detecting the presence of water, or signs that gases like methane and oxygen – fundamental building blocks of life on Earth – are present in a planet's atmosphere.

"These kinds of biosignatures present an indirect method of detecting life, you are detecting metabolites of life,” study lead author Lucas Patty told Euronews Next.

“What we are measuring is a direct signature of life, we measure how life itself interacts with light".

So, how does it work?

The technique used in the study relies on detecting something called "circular polarisation".

It's a phenomenon unique to biological organisms that results in some of the electromagnetic waves of light they reflect travelling in either clockwise or counterclockwise spirals, due to the natural asymmetry of their molecular structures.

Most molecules found in living organisms, like DNA, are "chiral". That means they can't be superimposed on their mirror image. Hands, for instance, are chiral, the word originating from the ancient Greek for "hand". You'll have noticed this if you've ever tried to shake someone's left hand with your right.

While hands usually come in pairs of left and right, biological molecules almost exclusively occur in either their “left-handed” or their “right-handed” version. They are homochiral, in other words, they only turn one way.

This homochirality is a so-called biosignature, as the characteristic spirals of light waves it causes can only come from biological sources.

"There are no false positives which can be the case with many other biosignatures," Patty said.

What did the researchers do?

During a roughly 20-minute flight in September 2019, a specially-adapted camera was flown two kilometres above the ground, at a speed of 70 kilometres per hour.

The camera was set up to detect the specific wavelengths of light that are reflected by living organisms.

Working in partnership with Swiss planetary research centre NCCR PlanetS, the team found that their camera - technically known as a spectropolarimeter - could distinguish between the biosignatures of grass fields, forests and urban areas from a fast moving helicopter.

"The significant advance is that these measurements have been performed in a platform that was moving, vibrating and that we still detected these biosignatures in a matter of seconds," project manager Jonas Kühn said in a statement.

According to Patty, the experiment's success marked a significant technological step.

"Just 4 years ago, we could detect the signal only from a very close distance, around 20 cm, and needed to observe the same spot for several minutes to do so," he said.

The researchers now hope to take their work beyond the Earth's atmosphere, in pursuit of their ultimate goal of finding life on other worlds.

"The next step we hope to take, is to perform similar detections from the International Space Station, looking down at the Earth,” said Brice-Olivier Demory, professor of astrophysics at the University of Bern.

“That will allow us to assess the detectability of planetary-scale biosignatures. This step will be decisive to enable the search for life in and beyond our Solar System using polarisation".

While the focus of the study has been on alien life, the researchers emphasised the technique could have applications closer to home, monitoring the planet-wide impact of climate change by tracking deforestation, toxic algal blooms and the health of coral reefs.

"Measuring the circular polarisation signals could be a very powerful tool complementary to normal reflection measurements in assessing vegetation health, and it can thus help to identify and monitor vulnerable regions," Patty said.