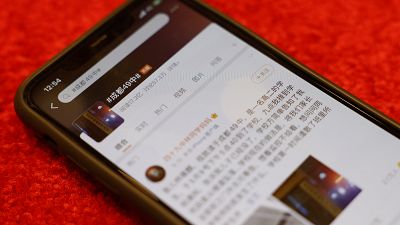 Several accounts reported that they had been denied access to their Weibo profiles over the weekend.

Some posted images online, which showed a message on their accounts saying that they have violated "relevant laws and regulations". No further information was given about why the accounts had violated Weibo's community rules.

Social networks are regularly used by cryptocurrency retailers and advocates, such as Tesla CEO Elon Musk, to discuss trading and the markets.

The crackdown on the Twitter-like platform comes as Beijing is escalating its efforts against bitcoin trading and mining online.

Chinese miners currently account for some 70 per cent of the world's supply of Bitcoin, but the country has already lost its position as a global trading centre after Beijing banned crypto exchanges in 2017.

In recent weeks, Chinese media have also stepped up reporting against cryptocurrency trading, warning of the dangers.

Some critics have voiced financial concerns, as well as pointing to China's own environmental goals.

Bitcoin and other digital cryptocurrencies require a lot of energy to mine, and there are fears this could impact Beijing's aims to meet clean energy goals by 2030 and become carbon neutral by 2060.

Musk has himself recently tweeted his concerns about the "rapid increasing use of fossil fuels for Bitcoin mining". The electric car maker said last month that they will stop accepting Bitcoin as payment, citing these environmental concerns.

NYU Law Cchool adjunct professor Winston Ma told Euronews that the blocking of cryptocurrency Weibo accounts was "not a surprise".

"China's government has made it clear that no Chinese version of Elon Musk can exist in China's crypto market," said Ma.

"This social media crackdown is just part of this effort to prevent ordinary retailer traders from believing get-rich-quick messages."

"In a way, China has now created a precedent for crypto trading relating to the application of social media."

"Even though China is the largest crypto mining market in the world, only a small percentage of the country's population participate in crypto trading," Ma said.

"These Weibo accounts affected are the ones that promote crypto trading and provide links to trading platforms, using their social media influence to attract user traffic."

After the Weibo freeze in China, Bitcoin continued its decline in market value, but analysts have suggested this could also be related to another tweet from Musk that suggested he was ending his association with the cryptocurrency.

The UK is considering a new 'Britcoin' digital currency