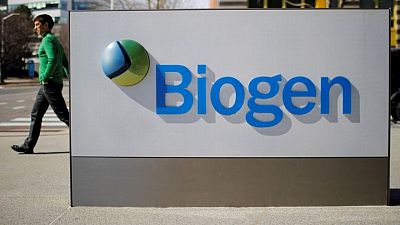 – The U.S. Food and Drug Administration on Monday approved the first treatment of Alzheimer’s disease in nearly two decades, Biogen Inc’s aducanumab, after a long development process including one large trial that failed to meet its goal.

This is the first approved Alzheimer’s drug to treat a cause of the disease rather than just symptoms. The following lays out the twisting process of how the drug from Biogen and partner Eisai Co Ltd finally won approval:

2007: University of Zurich spin-off Neurimmune Therapeutics licensed worldwide exclusive rights of aducanumab to Biogen, which took up development and marketing responsibilities for the drug (https://bit.ly/3g3MlFm)

December, 2014: Biogen said the company was planning a late-stage trial of BIIB037, or aducanumab, after the drug cut brain plaque levels and significantly improved cognition in a small early-stage study. (https://reut.rs/3wZ9Ypn)

March, 2015: Aducanumab became the first experimental Alzheimer’s treatment to significantly slow cognitive decline and reduce what is believed to be brain-destroying plaque in patients with early and mild forms of the disease, according to a small study of 166 people. (https://reut.rs/3g1HHHM)

July, 2015: Biogen researchers said the 6 milligram dose of aducanumab, which investors hoped would be a safer alternative to the drug’s 10 mg dose that produced high rates of a type of brain swelling, failed to significantly slow mental decline. (https://reut.rs/3fMBbpv)

October, 2017: Biogen reduced the potential royalty payment on commercial sales of aducanumab to Neurimmune Holding AG by 15%, in exchange for a one-time $150 million payment. (https://bit.ly/3fNcxVL)

March, 2019: Biogen and Eisai ended the two late-stage trials for aducanumab after an independent data monitoring committee found the drug was unlikely to be successful. (https://reut.rs/3cax98b)

October, 2019: Biogen revived plans to seek U.S. approval for aducanumab, saying data from more patients in two discontinued studies showed the drug slowed progression of Alzheimer’s disease. Biogen said new analysis of more data from the trials showed that one of the studies met the main goal, while the other did not. (https://reut.rs/3pgD8gZ)

October, 2020: U.S. FDA said it would conduct an expedited or “priority review” of aducanumab data and set an action date of March 7.

November, 2020: The FDA’s staff said Biogen showed “exceptionally persuasive” evidence that aducanumab is effective, in the agency’s documents released ahead of a meeting of outside experts who considered whether to recommend the drug’s approval.

November, 2020: A panel of outside advisers to the FDA voted that aducanumab has not been proven to slow progression of the disease, in a break with the FDA staff assessment.

January, 2021: The FDA extended the review period for aducanumab by three months to June 7.

June 7, 2021: The FDA approves aducanumab under an accelerated programme. It will require a post-approval study by Biogen and said that if the drug did not work as intended it could be removed from the market.