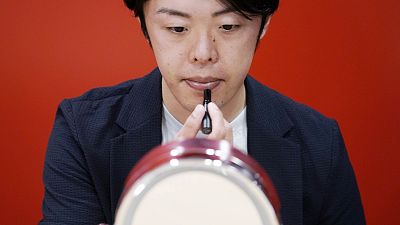 Lipstick, foundation, and concealers have long been pillars of women’s beauty routines. Globally the cosmetics market is projected to be worth more than €629 billion by 2025.

But since the onset of the pandemic, brands and salons in Japan have constituted a marked increase in men looking to use their products and services.

"We have fewer opportunities to meet people under this situation. And I didn't like myself paying less attention to my appearance," said Yoshihiro Kamichi, one of the growing number of men who have begun experimenting with makeup.

Kamichi pointed out that spending more time at home means he is looking at himself much more critically in the mirror. He has turned to makeup to make him feel transformed. "Who is this person?" he said. "I was surprised how different I look".

Ikemen works, a Tokyo-based salon for men, have seen their profits jump 25 per cent over the last year, an increase they also attribute to working from home.

"The majority of our customers were men in their teens and 20s, but we have more businessmen in their 40s, 50s, and 60s than before thanks to remote working," says founder and CEO Takumi Tezuka.

Tezuka points out that older customers tend to spend more money which means his business will have a more stable revenue base if the trend continues.

In their newly-opened store in front of Tokyo’s Harajuku Station, Japanese cosmetics retailer @Cosme TOKYO has dedicated an entire section to men’s makeup.

"I think there are men who cannot buy cosmetic products because it's hard for them to casually drop-in," says Kenta Yamazaki, a hairdresser who wears makeup every day.

"I think it's nice we now have this section. But I wish they could make the section bigger so that men can more casually drop-in".