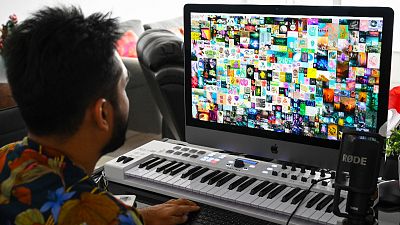 Considering his unpretentious demeanour and modest lifestyle, Vignesh Sundaresan bears little resemblance to what you might expect from a traditional wealthy art collector.

In fact, the 32-year-old blockchain entrepreneur is responsible for catapulting Beeple into the ranks of the most expensive living artists with the purchase of his digital artwork for $69.3 million (€57.8 million).

The sale also set the record for the price of a non-fungible token, or NFT, which uses blockchain technology to authenticate digital files not existing in material form.

"Even for me to spend that much money, it's quite hard," says Indian-born Sundaresan. "I don't throw money on stuff, I like to think I'm very reasonable when it comes to the real world and so it was hard on me also.

"But I thought this piece was that important, so I paid for it."

Sundaresan endured a gruelling two-week auction at Christie’s to buy "The First 5,000 days" whose starting price was set at just $100 (€83).

By the end of the auction, 22 million people had logged on to watch the dramatic finale.

The programmer, who is now the chief executive of an IT consulting firm and also finances an NFT-investing fund called Metapurse, insists the effort and the money are worth it.

"As a piece itself it's awesome," he says. “But there is this signalling and symbolic intention also to show the world that... there's this whole thing that's going on underground".

NFTs have been growing steadily in popularity over the past few years but it was the recent headline-grabbing Beeple sale that really launched them into the mainstream. Proponents of NFTs argue that this format is a means of giving digital artists proper compensation and recognition for their work.

But not everyone is convinced that the benefits will reach all creators.

"I see the occasional artist getting a lot of money because they're lucky," said Antonio Fatas, a professor of economics at INSEAD business school.

"They're in the right place at the right time. But for the regular artist trying to make themselves known, I do not see how this is helping".

Watch the full interview with Vignesh Sundaresan in the media player above.

Cryptocurrencies now worth more than the world's most valuable company