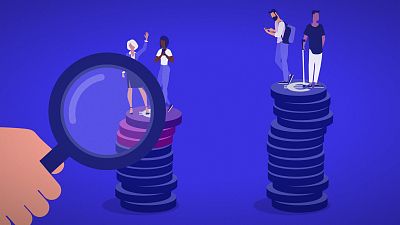 Just how bad is gender inequality in Europe?

Women are not equally valued for their work. In Europe, they earn almost 15% less on average than a man - often for the same work.

For every euro a man earns, on average a woman earns 86 cents. Another way of looking at it is that women work an extra 51 days per year to earn the same as their male colleagues.

That’s not fair, why is it happening?

One of the main reasons women earn less on average than men is that they still take on most of the childcare. The pandemic has exacerbated this, with women shouldering the majority of the extra, unpaid care during lockdowns.

It means that many women chose to reduce their working hours. 30% of women in the EU work part-time compared to 8% of men. This can make it harder for women to progress in their careers.

There are also more women in lower-paid sectors like caring and education. While in better-paid sectors, such as science, technology, engineering and mathematics (STEM), the proportion of male employees is very high, at over 80%.

There is an even larger pay gap in management positions with women in management earning 23% less than men. At the top, only 10% of big company CEOs in Europe are women.

By the time women get to pension age, all of this has contributed to an even wider pension gap of 30%.

What’s the picture across Europe?

There are considerable differences between EU countries. The highest gender pay gaps of over 20% are in Estonia and Germany, while Romania and Luxembourg have the lowest difference in pay.

What is being done to close the pay gap?

The European Pillar of Social Rights sets out the need for gender equality. To help close the gender pay gap, the European Commission is introducing binding pay transparency so companies will be legally obliged to publish how much they pay their workers.

The Pillar of Social Rights also calls for a Work-life Balance with the right to a fair balance of parental leave and more flexible working. This has been adopted into EU law and member states must make it their national law by 2022.