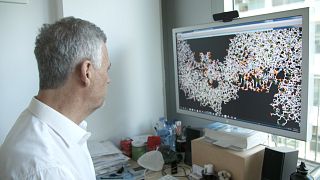 Futuris investigates how scientists are treating respiratory disease with synthetic vaccines developed from bacteria. It is hoped the research could eventually lead to vaccines to tackle COVID-19.

For several years, researchers at the Centre for Genomic Regulation (CRG) in Barcelona have been studying a genus of bacteria called mycoplasma. The goal is to develop smart vaccines to prevent respiratory diseases that are found in both farm animals and humans.

Cutting-edge technology is used to grow synthetic bacteria. Those involved in this European research project called MycoSynVac say the same science could eventually be used to develop a COVID-19 vaccine by using coronavirus proteins as antigens.

"One strategy is to use the proteins of those viruses as vaccines by training our immune system to produce anti-bodies. This is what we call "recombinant vaccines". So when the virus appears, the immune system is able to block the virus and eliminate it. But the challenge is huge. It is a long and costly process. And sometimes you are not just dealing with one protein from the virus, but with many different ones. So this is really challenging," says CRG Biotechnologist Maria Lluch-Senar.

"We can even kill bacteria that infect human lungs"

The synthetic, non pathogenic bacteria grown here, are designed to trigger an immune response in farm animals. But once the organism is understood, the universal language of DNA means it is possible to find other biological applications, says CRG Director Luis Serrano.

In order that the bacteria becomes an ally that can support the immune system, scientists must first disguise it. This is done by modifying the bacteria's genome. To do that, experts in Bordeaux have switched to yeast.

"Because in mycoplasma neumonie we don't have many tools to produce that modified genome, we give it to a yeast. Inside the yeast, we have a lot of good tools that allow us to modify this genome. So using the yeast, we are able to remove these bad genes, and we are able to insert the one we want to keep. So basically the yeast is going to build for us using our guidance a new genome, that we call a synthetic genomes that basically only has the good parts that we want for our vaccine," says INRAE Microbiologist Yonathan Arfi.

In terms of COVID-19, scientists say they are optimistic that this field of synthetic biology could eventually produce meaningful results within 18 months.

"COVID-19 is here to stay. It is not going to disappear. It will be like the seasonal flu. We'll need to get vaccines every year. We'll need to have tools to fight the infection if you get it. And our approach can provide some of these tools," insists Serrano.