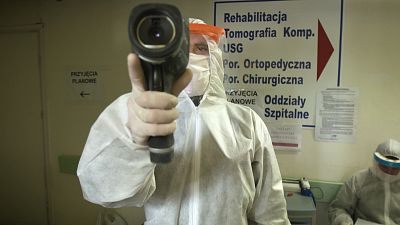 In this episode, Real Economy focuses on how the European Union is redeploying its cohesion policy funds to tackle COVID-19.

At 355 billion euros, the EU's structural and cohesion funds constitute a significant chunk of the bloc's spending. Cohesion policy aims to reduce disparities in regional income across Europe. Exceptional times, however, call for exceptional measures and in an effort to help member-states cope with the health and economic emergency, 54 billion euros of the fund has recently been redistributed to cope with the crisis.

The money, which has been taken from unused reserves or distributed earlier than planned, will go towards healthcare spending, like masks or hospital equipment, short-term employment schemes, and to companies, so they can pay staff.

In Poland, the coronavirus has hit the country's healthcare system hard. One out of six confirmed cases are thought to be healthcare professionals. Malgorzata works as a pulmonologist in Kuyavian-Pomeranian province. At the start of the crisis she says there was a serious lack of proper protective equipment, but thanks to an initiative supported by the European Social Fund, she says hospitals one are now getting the vital material they need.

"Being able to buy this equipment has brought us, let’s say, some comfort," Malgorzata says, adding: "It’s state of the art, enabling us to monitor patients at their bedside, but more importantly, they are also connected to a control panel, which is far from the patient’s bed, so safe for the hospital staff. This European funding is vital, like many countries Poland wasn’t ready for such a pandemic."

Izabela has worked in the paediatric department of Torun Hospital for 25 years. When the epidemic hit, she volunteered with her friend Elzbieta to help staff treating patients with COVID-19.

“We wear these protective suits, and keep them all the time when on the ward. We assume the whole ward could be infected. When we are close to patients that have tested positive for coronavirus, we use additional protection, such as aprons, visors, HEPA masks, gloves."

Around 10 million euros from the European Social Fund has been reallocated to buy cleaning and protective equipment, as well as ventilators and heart monitors. The project is also supporting two temporary respite centres, like this hotel, where the two nurses can stay after a long night shift.

"This centre is important because you can really relax after being on shift. I don’t have any household duties here...meals here are prepared for us. We know that this is temporary," says Elżbieta.

Approximately 10 billion euros of the EU’s cohesion policy - more than 10 percent of funding for 2020 - will be channelled to fight the pandemic in Poland. The country's minister for Development Funds and Regional Policy, Małgorzata Jarosińska-Jedynak, believes the move could save hundreds of thousands of jobs.

"I think it's a lot of money, and money that can do a lot of good in these areas, hospitals, entrepreneurs. The money could help save half a million jobs. In this situation, in which we are now, we must also rethink the priorities of cohesion policy. We think that this policy should, as well, be adapted as possible to the specific situation in individual countries and the current economic situation because it's very dangerous to stay at the same level."

Economist Thomas Wieser was at the heart of emergency meetings during the eurozone crisis. Euronews' Efi Koutsokosta spoke to him about the current health and economic emergency facing the EU.

Efi Koutsokosta: "The EU, for the moment decided to reallocate some of the remaining structural and cohesion funds to address the massive needs of the coronavirus crisis. Can this policy compensate the lack of unity among member states?

Thomas Wieser: "I would say that some of the largest recipients, net recipients of EU funds, have been those member states who have been calling central elements of European values or European cohesion or European solidarity into question. So my instinctive response would be that I see absolutely no connection, absolutely no correlation between receiving very large sums out of the EU budget, being a very large net recipient, which is being financed by other member states and feelings of European solidarity or cohesion, that does not seem to be the case. And if I remember correctly the figures,the sums that were dished out to several member states had no direct bearing on the severity of the economic hit that these countries were having as a consequence of COVID-19."

** Efi Koutsokosta:** "So how this new budget should be shaped and used in order to face the new post- coronavirus reality?"

Thomas Wieser: " In my view, it should be at around 2 percent of gross national income on an annual basis, which is significantly larger than the present proposal. So the big question will be, even if we manage to see a considerably larger budget, at least for the coming couple of years. What will this budget deliver? Will it be predominantly grants which are financed out of the EU budget, which are given to all countries, of course, but especially to the hard hit? And this net transfer of resources is a precondition for the post pandemic recovery taking hold. That is the good possibility. The worst possibility would be that all of the additional headroom in the EU budget is taken up in order to provide loans to member states or regional entities in member states, etc., which would allow for a considerably higher sum. It would have to be repaid and as such it would not be incurring any net cost to the EU budget barring any contingent liabilities which will not occur."