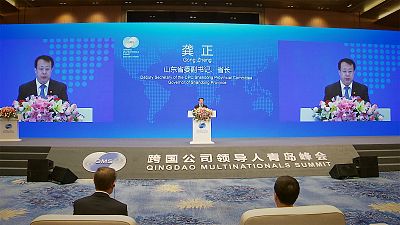 Euronews visited Qingdao, China, for its first multinational summit. Dialogue, cooperation, and win-win business success lie at the heart of this forum that serves as a gateway to China for international companies and will be hosted in Qingdao on an annual basis.

Multinationals have been investing in China over the last 40 years. By the end of 2018, more than 950,000 foreign-invested enterprises have been established in the country, bringing foreign direct investment of €1.8 trillion (US$ 2.1 trillion). This makes China one of the world’s largest host countries for multinationals. China wants to attract more investments and so has started a new round of broadening its global connections.

Yunjie Zhou, President of Haier Group said, ''This summit sends a signal to the global multinational enterprises that China will continue to open up to the world. The business environment is constantly improving and there are many opportunities for international enterprises in the country. These are the main principles outlined by our President Xi Jinping.’’

CEO’S from international economic organizations, industry leaders and leading Chinese companies joined the event. Among them, Roberta Lipson CEO of United Family Healthcare which manages seven clinics in the country and was the first that opened a western-standard hospital in China 22 years ago.

For Lipson, this summit is also a vote of confidence to the notion of globalization. "The message of this summit is the importance of people coming together from around the world to promote mutual understanding. In this day and age, where there is so much working against globalization, these kinds of conferences that promote globalization and having multinationals come together is so very important.”

"Investment in China makes a lot of sense"

BOSCH is not new to the Chinese market, as it arrived in the country 110 years ago. For the German corporation, this market is a constant challenge, which helps the company improve products and services.

Vokmar Denner, Chairman of the Board of Management, BOSCH, said, "Investment in China makes a lot of sense because it is the largest market in the world in many areas, for example, automotive machinery, household appliances, and China also helps multinationals to become more competitive, because China is a very competitive market."

The United Nations Conference on Trade and Development supports the summit. For the UN, this forum maintains the idea that business profit must keep up with people’s needs and ecological standards.

"Qingdao multinational summit is important to me because of the sustainable development goals. This is about how we ensure social justice and how do we protect the planet and improve the environment. In terms of opportunities for collaboration, China is moving quickly into the new economy, is investing heavily on science and technology, is investing heavily on renewal energy. We see already that China is the biggest user in the world in terms of electric buses, electric vehicles," explained Nicholas Rosellini, UN Resident Coordinator in China.

The ''Belt and Road'' roadshow was one of the summit's highlights. In this new platform for international cooperation, 12 agreements were signed on key projects on artificial intelligence, health care, venture capital, and other emerging fields.

The city of Qingdao

Qingdao is the ideal host for this new summit. As a sea city, it was one of the first that opened up to the world. Since its founding in 1892, the port of Qingdao has played a major role in the economic life of the city and the region.

Nowadays, it has one of the most advanced automated terminals for the transfer of goods in the world. This green terminal uses electric energy and achieves zero carbon dioxide emissions, and brings China closer to the west.

At present, the average operation efficiency of the automated terminal is 36 containers per hour.

Qingdao is not only a business destination. It is a city with more than 10 million residents and is an open, modern, stylish and dynamic metropolis with good climate and many attractions.

An already popular destination for tourists, locals, and foreigners, the city tries to attract more investments in the tourism sector.

Watch the full programme of Focus by clicking on the player above.

The meeting of speakers of parliaments kicks off in Nursultan