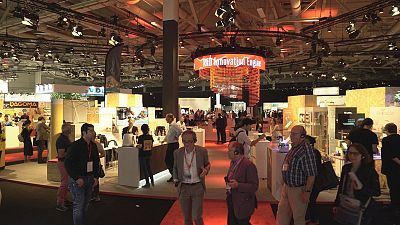 The future trends in consumer electronics and home appliances have gone on display at one of the world’s leading trade shows - IFA in Berlin.

And, for the first time, IFA had a global innovation partner - Japan.

The exhibition featured an innovation hub - IFA NEXT - where Japanese start-ups display their ideas. It showed how our life is going to change in the next five, 10 or 20 years.

Japanese companies said despite the hi-tech nature of their products, their aim is to "make society more human and inclusive".

One of the innovations on display is e-skin, designed by start-up Xenoma.

It has developed "intelligent" trousers and sleeves that can show up body movements.

Bianka Hamann, of Xenoma, said the trousers contain seven sensors that transmit the movements to a hub on her back.

"This hub sends the data to the computer and to our monitor via bluetooth. And then you can see, very clearly, simple or even bigger movements on the monitor in real time."

It's hoped the technology will be used for sport or medicine, for instance during rehabilitation.

Another idea on display was Skydrive, a taxi equipped with three wheels and four propellers that could put an end to traffic jams. The first manned test flight is scheduled to take place next year.

Tomohiro Fukuzawa, President of Skydrive, said: "The good thing is that you don’t need the same driving skills as for flying a helicopter or an airplane. The only thing we have to do is go back, right, forward, so anyone who can play with a drone can use this air mobility in the future."

The Japanese pavilion was equipped with a holographic display that projects videos in mid-air.

Kazuhiro Yamamoto, Chief Global Strategist of Asukanet, said: "We want to support innovation with user-friendly interfaces for an inclusive and human-centered society."

The Japanese start-up Empath has developed software that can detect human emotions, not by what you say, but by how you say it.

Currently used to improve call centres, this innovation was first designed for the mental health sector to help identify which earthquake victims needed help from care workers and psychiatrists.

"When we were in Japan and went to the big tech companies, or when we experienced the vibrant start up-scene in Kyoto, or when we saw how many international staff members work in major enterprises or in start-ups nowadays, you can see a real openness. In this respect, Japan is the right partner country for IFA Next."

Japan's technology leads the way in caring for the elderly