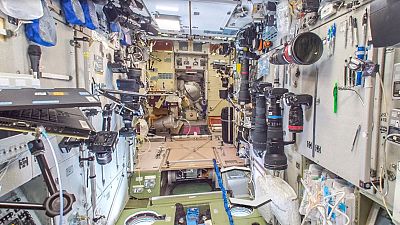 Astronaut and Euronews space correspondent Luca Parmitano has arrived at the International Space Station (ISS). This is the 360-degree view of the base.

These panoramic images, available through Google Earth, show the areas inside the ISS where he will be spending the next six months as part of the Beyond mission.

The service module — including its living quarters, life-support system and data processing — can be seen along with the docking compartment used for spacewalks and the Bigelow Expandable Activity Module (BEAM) which can be assembled in space for extra room to work.

From inside these areas, Parmitano will share details through Euronews of his adventures in orbit during the mission, which took off on July 20 — the 50th anniversary of the Apollo Moon landings.

The European Space Agency astronaut will describe life on the ISS, ranging from the challenges of keeping fit and healthy in microgravity to the pressure of carrying out cutting edge science experiments for researchers on the ground.

In October, the 42-year-old will become the first Italian and just the third European to command the ISS.

On his first mission to the station, Luca spent 166 days in orbit and personally conducted over 20 experiments. He has also taken part in two spacewalks.