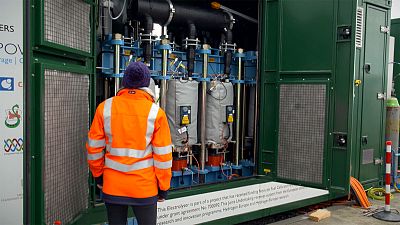 In our latest episode of Futuris, we ask if hydrogen can meet the energy demands on remote, isolated territories? European researchers are working to find that out on constrained lands, such as the Orkney Islands in the UK.

Around 300 people live at Shapinsay, one of the 20 inhabited islands in Orkney. At its main power station, the turbine feeds the electrolyser, where water is split to obtain hydrogen. According to the project manager Catherine Mcdougall, this facility can produce up to 400 kilos of hydrogen per day.

"We take the hydrogen at a 20 bar pressure and it is stored in a storage tank. And then it is compressed up to 200 bars (pressure) for use in several applications around Orkney."

Among those applications, hydrogen will soon be used for heating classes at the nearby local school, attended by 25 students (who are 12 years old and under). Mcdougall described the process for heating the schools.

"It’s essentially taking in an underground pipe from the storage that runs underground up into the boiler house, where it is fed into the boilers. And then they use the hydrogen to create heat, that then is used in heaters into the school. They have three heaters in the classrooms, and that keeps the children nice and warm".

Part of the gas is transported to the archipelago´s main island for other uses. Five cars from the local council have been fitted with hydrogen fuel cells. Refuelling can take between 3 and 5 minutes.

The whole system works at high pressure, so it needs to be within a safe, resilient infrastructure. The next step is to use hydrogen to fuel the ferries linking the archipelago´s islands.

Hydrogen is then stocked in the 59 aluminium containers that feed a fuel cell system able to produce up to 75 kilowatts of power aimed for ferry transportation. Chemical Engineer Megan McNeil (Community Energy Scotland ) described the conversion process.

"It [the fuel cell system] converts the hydrogen with ambient air to produce electricity. We have 40 battery packs here, which the electricity runs through, and then we supply electricity to the ferries."

These infrastructures are part of a European Research project in close cooperation with local communities. Its goal is to use hydrogen to curb fossil fuel dependency in isolated places. Scientists here say in ten years’ time, Orkney´s 22.000 inhabitants could rely almost exclusively on green forms of energy, including hydrogen.