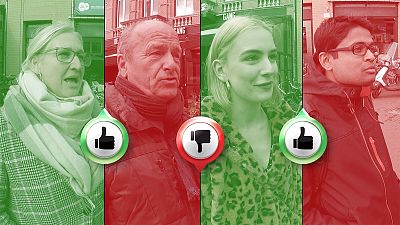 There has rarely been much public interest in the European Parliament elections, but now they are being held at a challenging time for Europe. The UK is leaving the EU and anti-establishment parties are on the rise. But what do voters really want? In this episode of Real Economy, the team takes a closer look at how the concerns of the electorate will be reflected in the vote and, therefore, EU politics over the next few years.

Fifty-one percent of EU citizens claim to be interested in the upcoming European Parliament elections. But what are their campaign priorities? Immigration tops the agenda, with 50 percent of people identifying it is an important issue to them. It is followed closely by the economy and growth, at 47 percent. Member states that show a strong interest in this are: Belgium, Germany, Ireland, Austria, Poland, Portugal, Slovakia, Sweden, Hungary, Italy and Lithuania.

Also at 47 percent is the problem of youth unemployment, with approximately 3.4 million under-25s in the EU out of work. At a national level, however, 25 percent of EU citizens listed unemployment as their primary concern.

In fourth place is the fight against terrorism, which 44 percent of people chose as a priority. However, this subject fell five percent from the top priority spot between April 2018 and September 2018.

In contrast, the interest in climate change grew from 35 percent to 40 percent within the same time frame.

Other campaign priorities that were highlighted were human rights, democracy, social protection, defense, consumer safety, the preservation of external borders, the protection of personal data, and the future of the European Union.

The public perception of the national economy varies drastically between different EU member states. In the Netherlands and Luxembourg, 93 percent of the population say the state of their economy is good, whereas in Greece, only two percent do so.

At its worst moment in 2011, the Greek economy contracted only 9.1 percent. After eight years of crisis and austerity, Greece finally exited its bailout programme in August 2018. Its bailouts totalled €288.7bn, making it the largest financial rescue ever.

Despite this, many Greeks are still not satisfied with the current state of their economy.

"Everything is going from bad to worse. It will be the same difference," one man told Euronews.

“I am not satisfied 100 percent. But obviously important steps have been taken so far,” another man said.

Euronews' Sasha Vakulina met with Panos Tsakloglou, a professor at Athens University of Economics and Business, and asked him why Greeks still feel so negative towards their economy.

"It is not truly surprising that people are thinking about the economy in these terms. Take into account that fiscal consolidation was implemented to a very considerable extent through increases in taxes. As a result, disposable income declined by more than 40 percent. These are truly staggering numbers. Now also take into account that, despite the fact that economy started growing again, unemployment is still over 18 percent and the living standard is still substantially lower than it used to be before the crisis," he said.

In January, the Greek unemployment rate was 18.5 percent, almost three times higher than the current EU level of 6.5 percent.

But, economic recovery is still underway, and in 2019 GDP is set to grow at around 2.2 percent.

To find out what will change after the EU elections, Euronews spoke to Nikos Vettas, general director of the Foundation for Economic and Industrial Research.

He said: "In a sense, it is the first time during all these programmes and the almost 10 year recession that we do not have an opposition that is threatening to undo the stabilisation of the economy. In fact there is hope that when this political change happened, there is going to be an acceleration of the growth rates of the economy because of the more pro-market reforms that they will implement."

In contrast to the concerns of the Greeks, Dutch people, as well as Luxembourgers, are the most satisfied in Europe with the current state of their country's economy.

Euronews' Guillaume Desjardins visited Amsterdam to find out what exactly the Dutch are so happy about.

"The services are still well maintained. Infrastructures well kept, generally most people are cared for," said one woman.

Another said: "I have my own job, and I make good money for what I do, so I'm really happy."

One man told Euronews: "I have a good pension, and three or four times a year on holiday, with my girlfriend and yes, I'm very happy."

?? The #Netherlands: Growth set to slow amid weaker domestic and external demand

The Netherlands' trade balance is positive, their unemployment rate is low (3.5 percent), and their disposable household income is rising due to a recent lowering of income tax, as well as collective bargaining and a favourable global conjuncture.

Euronews met with Pieter van der Marel, the CEO of Pilot Distribution, which is one of around 1.1 million Dutch businesses that contribute to about one third of the country's total turnover and jobs.

Six years ago, Pieter started making custom made bikes with a friend. Now, his company has five employees and even interns. But with new tariffs on bike frames from China, he has to adapt to new challenges.

"We work together with a factory that makes nothing else, other than titanium frames, so the knowledge is there, the skills are there. They are really skilled people, it's hard to find them in Europe, especially technical people are scarce. And because they are getting scarce, they're getting more expensive," he said.

Dutch economists also worry about the high level of self-employed workers with little social protection in the country. They predict a rise in both inflation and unemployment levels in the coming year.

But, despite that, people that live in the Netherlands are still more satisfied with their economy than those in Germany, Sweden, Poland and many other member states.

Euronews' Guillaume Desjardins met with Philip Bokeloh, an economist from ABN AMRO, and asked him why this is.

He said: "The standard of living is fairly high, and is also good privately. If we compare the number of hours that we work to the Greeks, we work much less hours, and as a result, we have much more spare time so that benefits the wellbeing of people."

But, Mr Bokeloh was hesitant to say whether the satisfaction rate is bound to last.

"I already see a drop in sentiment, so this might continue if Brexit is not sorted out well, and if the international conflicts rise even further. So will they be as happy as today? Hard to tell, but it's more likely that it will drop some more, than rise."