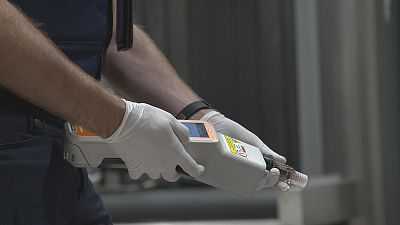 EU scientists are working to analyse and identify synthetic drugs, in a fight against a rapidly-growing market.

New psychoactive substances (NPS) are designed to mimic the effects of illegal narcotics such as cannabis, cocaine or heroin, and can be extremely harmful.

Despite this, the synthetic drugs are often not illegal, earning the name 'legal highs', and can be cheaply purchased online.

In November 2018, the EU introduced legislation that identified NPS as "drugs", but that has not stopped the constant flow investigated by customs officers.

At the European Commission Joint Research Centre (JRC) in Ispra, Italy, scientists are working to compile an NPS "encyclopedia", that will help EU member states to fight against this new, dynamic drug market.

More than 750 synthetic drugs have already been registered, but new substances are constantly emerging.

Claude Guillou, head of the JRC narcotics laboratory, said that the drug market is currently facing a paradigm shift.

"The police and customs officers are confronted with the fact that there are more of these substances than traditional illegal drugs. In general, they rely on a data library to identify these products. But for these new drugs, which have just been synthesized, often there is absolutely no data. So we have to start from scratch and we need specialised labs like ours to identify these new structures," he said.

The drugs are usually sealed in small packages that are sent through the mail or associated with false customs declarations, making it difficult for authorities to immediately identify them.

Mr Guillou said: "We're talking about small seizures. Small pouches of a few grams. We're far from the idea of kilograms of cocaine carried in a suitcase."

The substances are often sent to the laboratory by authorities in different member states, after their own routine checks return unclear results.

"The mass spectrometer indicates the molecular weight of the sample. This, combined with the information from our nuclear magnetic resonance instrument, will enable us to elaborate the structure of the sample in question," said Veronica Holland, a scientific researcher at the laboratory.

After a few days of analysis, the chemical nature of the molecule is revealed, and the JRC team send it to the customs network. From there, it is in the hands of the individual countries.

They can decide to ban, however it is always possible that another variant of the NPS will quickly replace it.

"The production of psychoactive chemicals is progressing at incredible speed. We have reached two new psychoactive substances per week. We must be able to identify them very quickly," said Fabiano Reniero, a chemist at the JRC in Ispra.

From there, the drug manufacturers will generally re-produce the substances with slightly different chemical characteristics and re-package them, attaching a label that identifies their synthetic make-up.

The Ispra laboratory works closely with another JRC site in Geel, Belgium, where another group of scientists develop applications for the portable devices that help customs agents detect suspicious substances in the field, without having to handle them.

"The Raman spectroscopy is an analytical technique in which a ray of light acts on a molecule and makes it vibrate, allowing us to obtain a unique spectrum for each substance," said Jone Omar, an analytical chemist at the Geel centre.

Collaboration between the two laboratories allows the researchers to find solutions when the chemical fingerprint of a seized substance does not match with any in their library.

Together, they have also developed a new way to indicate whether the substance belongs to three main drug groups: cathinone, cannabinoid, or fentanyl.

"This means that a customs officer, even without the spectrum that identifies the substance, knows that he must treat it with great caution because it could be potentially deadly," said Ana Boix, a JRC analytical chemist.

You can watch the full episode of Futuris in English by clicking on the player above.