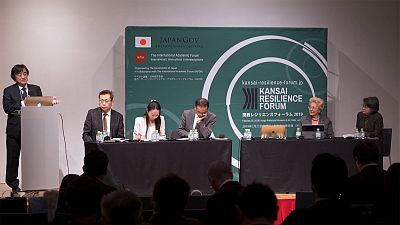 Japan is no stranger to natural disasters, especially the city of Kobe, which was hit by a devastating earthquake in 1995. The massive tremor killed nearly 6,500 people in the city and its surrounding region.

More than two decades on and the city and its people have emerged from the rubble, demonstrating the qualities of resilience and stoicism which Japan is so famous for.

The Kobe Biomedical Innovation Cluster, which was launched in the late 1990s, in a bid to revitalise the local economy in the wake of the earthquake, is now home to to some 350 companies and institutions. It employs some 10,000 workers and generates an estimated 1.2 billion euros per year.

A hub of innovation, the Kobe Eye Center is based at the cluster, while just next door is the Riken Advanced Institute for Computational Science – home to the K Computer, one of the most powerful supercomputers in the world.

Turning a disaster into an opportunity

Kobe's determination to turn the 1995 disaster into an opportunity was the reason why the Japanese government, together with The International Academic Forum, chose the city to hold the Kansai Resilience Forum. The event looks at resilience in all its forms, from the abstract concept to the concrete.

The forum was also intentionally held in the Hyogo Prefectural Museum of Art. Completed in 2002, the venue is regarded as a symbol of Kobe's renewal and resilience - qualities which experts at the event insist are vital, if both individuals and communities are to succeed and overcome challenges.

_"It is a basic human need. Not only in face of natural disasters, but also in the face of other challenges, like innovation and modernisation, the trade deals, the ageing society, the shrinking population...The problems of education and of motivating the young generations to continue fighting for a better future," says Ljiljana Markovic from the University of Belgrade.
_

Renowned Japanese Architect Tadao Ando sums up by saying, "Buildings, houses are necessary and we should rebuild them, but wounds have to be healed spiritually. I think art is very important. In the case of a disaster, we have to deal with practical matters, but we should not ignore the human soul."