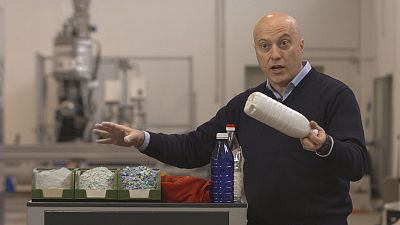 Our planet has a plastic problem. Of the billions of tons produced, only a small part, less than 10%, has been recycled. The rest is thrown into dumps. It is burnt, or ends up in the ocean.

The international Statistic of the Year for 2018 from the Royal Statistical Society is 90.5%: this is the shockingly high proportion of plastic waste that has never been recycled.

Euronews journalist Cyril Fourneris went to Piacenza in northern Italy to see an innovative new recycling process created an Italian inventor convinced that he can close the recycling loop.

"Every year, tons of bottles are burned in Europe. Here in Piacenza, Italy, researchers are building a reactor capable of recycling waste that was previously impossible to treat," Cyril Fourneris explains.

Euronews visited the laboratory of gr3n (pronounced "Green"), a start-up founded by Maurizio Crippa, an Italian inventor convinced that he can close the recycling loop.

The challenge for his team is to revive everyday objects that were until now deemed useless, because they could not be processed by mechanical recycling plants.

"Mechanical recycling, they can work just on very good materials. It means food containers, typically colorless bottles like this one, they can work also on colored bottles. But for example, this is too colored. They can’t process textile. Because from bottle, you produce clothes, but from clothes you can’t produce bottles. The point is mechanical recycling is downcycling. Through our technology we can do upcycling," Maurizio Crippa, CEO of gr3n, told Euronews.

gr3en has developed a machine capable of isolating polyethylene terephthalate, known as PET, the most widely used material in the clothing and packaging industry.

This process, called depolymerization, is sped up by the microwave reactor of a prototype machine.

"It is capable of merging the characteristics of a mechanical system with the strength of a chemical process accelerated my micro-waves into a single machine,"Synesis Chief Technical Officer and Gr3n partner Franco Cavadini told Euronews.

The result is a precious oil that comes out of the machine. Once purified, it will be possible to extract virgin PET, which will be used to produce plastic, or clothes. The loop is therefore complete.

The project won the 2018 Innovation Radar Prize in Vienna, at the beginning of December.

The best inventors and entrepreneurs from across the continent went to Austria to present their vision for tomorrow.

The ICT is an event organized by the European Commission to identify innovations with high commercial potential.

Maurizio's research appealed to the jury, which awarded gr3n the Overall Prize. The award should help his team to attract investors, in order accelerate the marketization of their invention.

"The challenge in Europe actually, to me at least, is that the path from basic research to applied research, to research centers of larger corporations, from larger corporations to business development of certain companies, and then to sales... this takes far too long. We need to do something in Europe. We need to make shortcuts (...) in order to be in the competition and to excel," said Pia Erkinheimo, a member of the jury for the Innovation Radar Prize.

Recycling more crucial than ever

The production of plastic is exploding. Increasing its recycling rate means reducing our dependence on oil, which is used in its creation. It is also a great financial opportunity for the plastic and clothing industries, and for recycling companies.

Gr3n can now look to the future with pride, with a higher capacity machine being developed in 2019.

"The next phase will be the realization of an industrial plant with a capacity of around 25,000 tons per year. This capacity can provide the solution for the collection of an area with 2.5 million people," said Maurizio Crippa, CEO of gr3n.