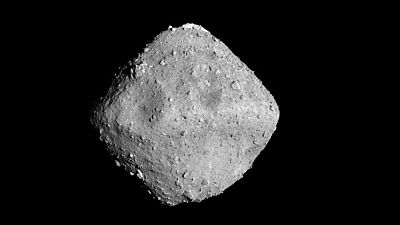 A Japanese spacecraft has just arrived at an asteroid and is preparing to collect a sample of its rocky interior.

Hayabusa2 is now just 20 kilometres away from the space rock, known as Ryugu, and has taken a striking image of its unexpectedly angular shape.

Now the mothership will begin flying around the asteroid, scanning and mapping it in detail, before dropping a German-French lander called MASCOT onto its surface. The mission finale will see Hayabusa2 itself flying right down and sending an "impactor" to dig into the surface, at which point the spacecraft will try to collect some of what's inside and then bring it back to Earth.

The first task is to look for possible landing spots on Ryugu in preparation for October, when the MASCOT lander will be released and drift down to the surface of the 900-metre asteroid.

MASCOT is about as big as a large shoebox, and has a swinging weight system on board that allows it to 'hop' around on the surface of the low-gravity asteroid, taking photos, checking the temperature and measuring if there's a magnetic field present.

In spring next year the team at Japanese space agency JAXA will then unleash its 'impactor' device from Hayabusa2 to blow a small crater into the asteroid. The scientists are interested in the innards of this ancient beast because asteroids are made from the 'rubble' of the formation of the solar system, and should bear almost pristine material from that time, 4.5 billion years ago, when the planets and Sun were forming.

Understanding those initial ingredients of our solar system should help piece together the story of how our planets formed and ultimately where we came from, too.

Another reason to study Ryugu is that it's what's known as an 'Earth-crossing' asteroid, meaning that its orbital path goes across that of our planet. It won't hit us, but something like it could, and something like it did 66 million years ago, killing off the dinosaurs.

Getting to know an asteroid well will help us understand what kinds of technologies could be deployed to deflect one, if we find one on a collision course with Earth. Asteroids come in many flavours, with some almost all metal — mostly iron and nickel — and others a mix of silicates and metals, while some like Ryugu have a high amount of carbonaceous material.

As the name suggests, there was another mission before Hayabusa2, which also collected a small sample of microscopic grains from another asteroid, but which suffered a series of technical issues during its journey. Those grains did make it back to Earth, however, and traces of olivine, iron sulphide, plagioclase and pyroxene were identified.

The rendezvous with Ryugu comes as international Asteroid Day approaches on June 30, an event featuring celebrities from the worlds of science and music debating how to face the threat to our planet from asteroid impacts.

Finally NASA also has a spacecraft on a mission to an asteroid. OSIRIS-REx will arrive at an asteroid named Bennu in August and take a sample to bring back home.