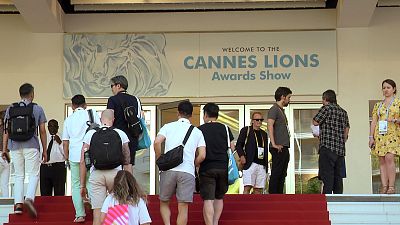 This year the Cannes Lions International Festival of Creativity was the world’s largest gathering of digital creators and innovators from the communications and advertising industries.

A multitude of speakers were at the festival, and there were a multitude of prizes for Film, Film Craft, Media, Press, Outdoor, Cyber, Promo & Activation, Direct, Design, Radio, Mobile and more.

Olivier Robert-Murphy, Global Head of New Business at Universal Music Group and this year’s President of the Entertainment Lions for Music jury told Euronews how exactly the winner is chosen and the way the music industry had to dramatically change its way in order to survive the digital revolution.

Olivier Robert-Murphy,
Global Head of New Business, Universal Music Group:
“The jury watch, prejudge all the video to arrive to a shortlist, here when you arrive at the Lions, a week before the award date. During the week you start to review every single video, non-stop, for five days. And then the most interesting day, for me anyway, is the last day, when you really go into a heavy discussion about which one should win.
It’s true that the music industry was the first one to be challenged by the digital world. But today it became an enormous opportunity because in 10 years what did we do? – We transformed, we embraced, we developed tools, we developed new revenue streams.”

Shazam has been one of main forces in this transformation. With 120 million active monthly users, Shazam’s Chief Revenue Officer Greg Glenday says the secret is to team up, rather than compete.

Greg Glenday,
Shazam CRO:
“We are partners with Spotify, Pandora, Amazon music, Google play, Apple music. So really anybody that distributes music – we work with. So we are just a discovery platform, so we have got to be Switzerland in a way, when someone Shazams music and then however they want to consume that music – we allow them to do so.
it’s paying off, by being open that way, it gives us a really great platform for brands to come in and help sponsor that activity. “

Greg Glenday agrees that “the next big thing” everyone is talking about is Virtual Reality – although the technology is still in its infancy.

AI could prove revolutionary for the marketing and communications industry https://t.co/LzCcmknQ2npic.twitter.com/xWtEqWV25n

VR makes life virtual, it mimics real world scenarios, usually in a 3D environment, so that people could potentially walk around the Louvre Museum in Paris, without having to physically be there. Or they can learn how to operate in a hostile environment, such as one of the frontlines of the conflict in Syria, without having to put themselves in danger. And that’s not to forget the most obvious VR vehicle – computer games – where the technology is at its most advanced.

Virtual reality is dominated by visual media, and for most people Youtube is currently the main platform people go to to look for video on the internet. Debbie Weinstein, the managing director for YouTube and video solutions, told Euronews what this brave new world might be like.

“I think the possibility of virtual reality is really having these deeply immersive experiences. It’s as if you are there, as if you are in the front row at the concert… So it’s as if the two of you, or three of you, or a group of you are at the front row of a concert of your favourite artist. You’re all experiencing virtual reality at the same time, but you are not actually there,” she says.

Out of billion hours watched everyday on YouTube, 60% of its videos are viewed on mobile devices.
Today we only need our smartphone to work, to get a car, order food, watch video, listen to music, read and so on. Many of us can spend days with our smartphones only and can’t survive for too long without it. Clement Yip, Digital Services & Experience Centre Leader, PwC China and Hong Kong told Euronews that in 2016 only there were more than 46 thousand startups in China.

Clement Yip,
Digital Services & Experience Centre Leader, PwC China and Hong Kong:
“Many of these start-ups, they tend to provide better services, more convenient services. So, for example, five years ago there were car-sharing apps, very similar to car, private car services and it got very popular in China. So in 2015, when they launched this, I think they picked up about 8 million orders a day. And you are talking about the forecast up to 2018 is going to go up to 37 million orders a day, so it’s really fascinating.”

This trend will not change much in the future – all the companies at Cannes agreed on that. But it will raise the issue of data privacy soon, according to Alex Cheeseman, the Chief Strategy Officer at Storyful, a company which trawls the internet looking for newsworthy content to sell to its subscribers.

“I believe there is going to be a major shift in consumers wanting to own their data. But for now people aren’t that interested. Consumers don’t really care about their data, they’lI give it to any website. They’ll tick the box, they don’t even read it.”

And when people do realize their data has been compromised, or they’re worried that it could be, what can they do about it?

“The only way for me to protect that data is to take it back myself, hold it, and wrap it up in my own layer of protection,” Cheeseman said.

And when the public’s trust in how safely their data is stored by countless web sites and servers begins to erode, many industries may face a sober reckoning.