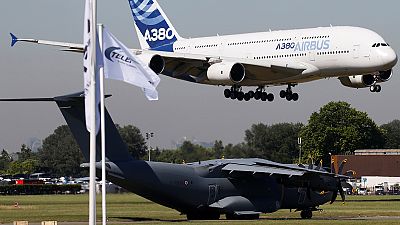 As the sun came up this morning, around 150,000 aerospace professionals set off for Le Bourget. Even the early birds got caught in the traffic jam surrounding the airport which has become almost traditional but spirits were not dampened and the show got off to a roaring start.

There was a huge security presence as French President Emmanuel Macron took his seat at the edge of the runway, surrounded by military personnel, aerospace VIPs and politicians. He then visited the European Space Agency centre where he had a quick chat with Astronaut Thomas Pesquet, who has just returned to earth after almost 200 days at the International Space Station.

The real stars of the show were, of course, the aircraft themselves and when the aerobatic spectacles got off the ground in the afternoon, huge crowds looked on open-mouthed at the seemingly impossible feats they performed. Some of the highlights included: an F35 fighter jet; Airbus A350-100S, A400M and A380; a Boeing 737 MAX 9; a Falcon 8x and a Rafale Air.

Airbus might have out-manoeuvred Boeing in the air, with four flights to their one, but on the ground, Boeing was busy signing contracts.

All in all, Boeing announced it had more than 240 orders and commitments from at least 10 customers for the new 737, which can carry up to 230 people in a single-class configuration.

“Many airports are running out of capacity and for those airports this is a perfect aircraft,” said Ajay Singh, the chairman of low-cost Indian airline SpiceJet, as his company signed a provisional deal to buy 40 MAX 10s.

However, Airbus immediately struck back with an order for 100 of its popular A320neo planes from leasing firm GECAS, as well as a deal for twelve A321neos with Air Lease Corporation.

Boeing’s challenge was water off a duck’s back for Airbus sales chief John Leahy who said much of the interest in the MAX 10 was from existing Boeing customers switching orders from other models.

At the time of writing, Airbus had 100 orders for the A320neo worth almost 10 billion euros to be delivered to Lessor GECAS between 2020 and 2024. In addition, they sold 12 of the A321neo aircraft – which will bring in about 1.35 billion euros. It was a very successful day indeed but rivals Boeing surpassed all expectations.

Even though Boeing are clearly off to a flying start, this is only day one and a lot can happen in a week, especially at the Paris Airshow. The question on many industry professionals’ lips is “Will Airbus finally sell some of their extra wide-body A350 XWB?” Some sources think they could soon announce an order for 10 of the wide-body jets, while others said on Sunday the European company was close to clinching a deal worth about $5 billion with low-cost carrier Viva Air Peru.