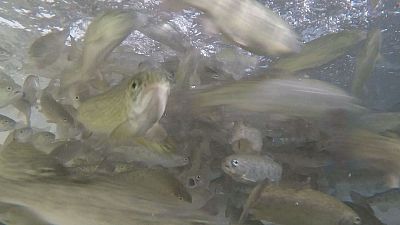 Can carnivorous farmed fish become vegetarian? Trout is one of Europe’s main farmed fish. Its diet relies on catching wild fish. The goal is to reduce the pressure on marine resources by finding plant-based substitutes.

Fifty percent of the world’s consumed fish comes from fish farms. In Europe, most species are carnivorous. Their food contains fishmeal and oil from smaller fish caught at sea. The availability of wild fish is no longer enough to cater for the growing fish farming sector. This experimental farm is testing various plant-based food, which is more sustainable.

“The aim is to use vegetable proteins instead of fish proteins,” explains farm manager Frédéric Terrier. “Ten years ago, food was made of about 30 or 40 percent fish meal. Today that’s been reduced by between 15 and 20 percent and we’re working to further reduce it.”

A large-scale European project has examined this shift to very low levels of fishmeal and fish oil for the five most important species in Europe: rainbow trout, Atlantic salmon, carp, sea bream and sea bass. Throughout the life cycle of the fish, growth, health, reproductive capacity, and nutritional qualities, have all been scrutinized.

“So far, we’ve clearly seen that all these species are capable of thriving without much of a harmful effect on any level,” Sadasivam Kaushik, ARRAINA (Advanced Research Initiatives for Nutrition and Aquaculture) Project Coordinator explained to Euronews. “Except in some cases when you go for really, really low levels, zero zero, then you can have some effects.”

Agricultural research institute INRA has had more mixed results with a 100 percent plant-based diet. It found that fish grow slower and don’t reproduce as easily. The nutritional properties are also lower. But scientists say there are solutions.

“With plant-based foods, there is less omega 3 fatty acid in the flesh. Strategies to counteract this effect are already known,” said Geneviève Corraze, Fish nutrition expert, INRA. “Before the slaughter one can for a few weeks or a month, give a food based on marine ingredients. That will ‘reswitch’ the fatty acid composition. The second possibility is genetic selection, in other words, there are animals that have more ability to synthesize and retain these omega 3 fatty acids.”

One of the project partners is also one of the world’s leading producers of fish food. It is also convinced that the future lies with plant-based proteins.

Today wheat, rapeseed, corn, vitamins and minerals, are combined with fishmeal and fish oils to make the food granules.

“We know how to make food with between 2 and 5 percent of fish meal and 2 to 5 percent of oil and have a trout that is completely edible, healthy and tasty,” said Michel Autin, Marine product manager, Biomar.

“There is a certain reluctance… fish farmers demand certain levels of oil and fishmeal because they feel more assured. That is quite natural and legitimate but the trend is to have less and less.”

New forms of protein derived from algae or insects are expected to be on the menu for farmed fish very soon.