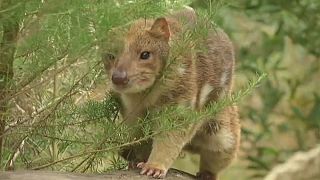 A rare close up of a spotted quoll could become even more unusual.

A naturally elusive creature, the marsupial is under threat because of rising fox and feral cat numbers encroaching on the quoll’s home turf, in the great Otway national park in Victoria.

Please enjoy this photo of an oblivious Eastern spotted quoll (?) as another quoll leaps over it pic.twitter.com/e21sNXb08D

“The assumption was that by preserving so much country in the national reserve system that conservation was going to be ensured. But we’re seeing more and more that without some sort of direct intervention we’re going to lose many of our most threatened species,” says Dr Jack Pascoe from the Conservation Ecology Centre.

Watching a species become extinct is bad enough but researchers are also already worried about what would then happen to the ecosystem.

So in the hope of boosting the number of quolls and other threatened species, 380 night cameras have been set up across the Otways.

They detect heat and motion and have so far picked up two hundred thousand images of creatures that include the long nosed potoroo, bandicoots and other animals, but only one quoll.

Researchers plan to use the images to pinpoint locations best suited to fox trapping in the Otways.

“So we can see what animals we have out in certain areas as well as how many foxes we have and how many feral cats we have. We can go back and see what we had in year one versus year five, ten and into the future hopefully,” says Parks Victoria’s Cathy Longmore.

Over the last three years, detection dogs have been trained to pick up the scent of quolls.
Out on the trail last year, they had some luck. It is one step towards helping conserve a species vital to the ecosystem.