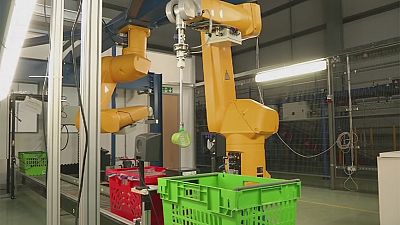 A UK-based online grocery retailer is developing a robotic hand that could one day pick fruit and vegetables for customers’ orders.

It has been developed by the technology team at UK-based online grocery retailer Ocado and is a result of SoMa (Soft Manipulation), a collaborative research project that includes Ocado, Disney and several European universities.

Did you know: a robot could be picking your online shopping? https://t.co/PP7FpP6I0H

The hand is just one element of Ocado’s experiments in warehouse robotics and automation
.
“There’s hundreds of algorithms and pieces of machine learning at play in this warehouse, with about 8,000 of these containers on the move at any one time it’s like choreographing traffic around a city and that requires an enormous level of complexity, use of big data, lots of sensing. So if a piece of conveyor has a problem, the systems have to route around it and find another way,” explained Paul Clarke, Chief Technology Officer, Ocado.

A recent Oxford University study predicted more than 40 percent of occupations could be under threat from automation in the coming decades.

But there’s a long way to go before robotic hands replace human ones in warehouses believe Ocado tech experts.

“Humans are great at responding to uncertainty and to challenges which they haven’t come across yet, their ability to use initiative and to deal with unpredictable situations is phenomenal. Not only that, they can access quality in a way which is still very difficult for our robotics systems.

‘So, whilst we’re ready to put some robotic systems into production now, the idea of being able to pick the full range and being able to do all the assessments of quality, of damage, dealing with overwrap, dealing with trash, repacking by manual operation, these are really big, grand challenges actually in the robotics and autonomous systems landscape,” opined Alex Harvey, Head of Robotics, Ocado Technology.

The goal, developers at the supermarket say, is to one day create a robotic hand capable of picking all of the more than 46,000 items offered by the online-only supermarket, from bananas to tinned goods.