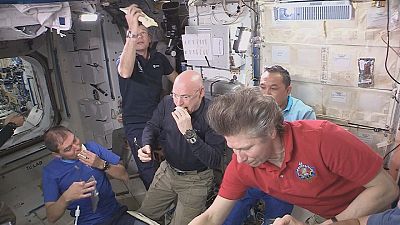 Food for astronauts on board the International Space Station is definitely not attractive, no matter the format in which it is consumed.

Every food ration must insure the crew members get the right nutritional balance in order to deal with the tough conditions in weightlessness.

Through the years space agencies have been striving to develop and improve the fare on board to help the astronauts feel more at home.

The French Chef Alain Ducasse and his team has been collaborating with the French National Space Agency since 2004 on the Space Food project.

Dried foods sent into space for astronauts can include everything from lobster and quinoa to confit de canard.

“We have to consider all the scientific aspects of space and cook for the maximum of time so that residual humidity is very low and that there are no crumbs,” explained chef Jerome Lacressonniere.

The production of the food has to meet certain criteria. There must be no bacteria to avoid diseases, the least amount of liquid and no crumbs to avoid interfering with the technology.

“Due to the state of weightlessness, the sense of smell is affected differently from when you eat on earth. There is a major loss or even a complete loss of flavour that we have to take into consideration. So the menus are spiced more, there’s more spice in space,” said Corine Dubel, nutritionist.

French astronaut Thomas Pesquet has been aboard the ISS since last November. He has a choice of dishes from a list of around 30 created by Ducasse’s team which account for the specific needs of living in orbit.

“Of course, during space flights, nutritional needs are a little bit higher. A man of 70 kg will need around 2800 calories with more proteins than what is recommended here on earth; so proteins will represent 20% of total energy input; lipid 30% and carbohydrates, which are a kind of fuel for the body, represent 50% of an astronaut’s diet,” added Corine Dubel.

Lacressoniere and his team prepared 13 dishes for Pesquet, including confit de canard, crusty vegetables on spicy tomato sauce and even a lobster with quinoa, green seaweed and lemon condiments. Weightlessness also influences the taste of the dishes.

“As we know, the taste and flavours in space are modified, we won’t salt the quinoa, green seaweed will be the ingredient that will supply a quantity of salt, and we know that during desiccation the taste of salt will be reinforced, so at this stage we don’t use salt,” explained the chef.

The main constraint is to avoid ingredients that can cause annoying physiological reactions for the astronauts.

But on special occasions they are treated to a special meal that reminds them of home.

“There are many recipes that are appreciated by astronauts, they are fond of gourmand dishes. Deserts are working well especially the fondue chocolate cake. It is ordered almost every time. Then you have some festive dishes with scallops or lobster that are in demand because they want to enjoy an exceptional meal in space,” concluded Quentin Vicas,
Space Food project manager for Alain Ducasse.

There is no scientific research to prove if fine dining helps put a spring in the step of the astronauts when taking a walk in space. But up there in orbit it is good no doubt to have the taste of home.

Germany's first ISS commander promises to be a "nice boss"