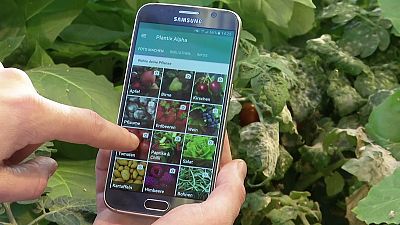 A mobile phone could be set to help farmers identify diseases in their produce.

Tomato plants for instance can suffer from a widespread disease called powdery mildew. It is a fungus which leaves a white powder on the leaves.

But thanks to an app called Plantix, developed by Hannover-based startup Peat, within a few seconds, it is possible to detect the disease.

“The idea is really to support small farmers in analysing the damage to their plants quickly and easily. It is quite often the case that the knowledge is with experts and consultants but not in the field.

‘We want the app to be like a lexicon for the pocket. Something that you have with you when you are in the field and something you can use straight away to evaluate the damage to the plants,” explained Simone Strey, Peat CEO.

The app is now being tested in India and Brazil having already been rolled out in Germany, Austria and Switzerland.

When a photo is taken in the app, it is analysed and a result is shown, but the data is also saved on the company’s servers in order to improve the algorithms for detecting plant damage.

“We have received over 10,000 pictures from India. And then we analyse what the biggest problem is in India. Is it viruses? Is it the fungus? Is it bacteria? Are the plants suffering from malnutrition? Or is it insects causing most damage? We can see that in our tool so we can analyse how agriculture in India could be made more efficient and sustainable”

The developers claim the app can detect over 60 diseases. Experts from the Soil Science Institute of the Leibniz University Hanover, have confirmed results are reliable when using the app as a prediction and detection tool.