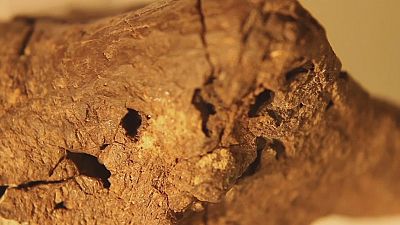 A small brown pebble found on a Sussex beach could be the first fossilised dinosaur brain tissue ever discovered according to UK scientists.

Thought to have come from a large herbivore, closely related to the Iguanodon, the fossil could show that the extinct giants were more intelligent than originally thought.

The pebble was discovered on a beach near Bexhill-on-Sea and scientists believe the dinosaur’s head became buried allowing the brain to be picked and preserved.

“When it (the dinosaur) died and came to rest, its head, at least, would have been within a water body, presumably in a swamp, and it lay upside down,” explains Cambridge University paleobiologist, Alex Liu. “And the top of the brain would have been rotated at the bottom of this little basin that the brain case was making and it’s that bottom of that basin where we seem to be getting the best tissue preservation.”

The cast was discovered near other dinosaur remains, including ribs and leg bones.

Using x-ray techniques, scientists produced a virtual, 3D model of the fossil, allowing them to explore its structure and how it formed. They say it shows distinct similarities to the brains of modern-day dinosaur descendants, namely crocodiles and birds.

“This amazing specimen has preserved not only the texture and structure of what are called the meninges – these very tough membranes that surround the actual soft parts of the brain – but the mineralisation has also preserved the fine blood vessels running through those textures and also the really fine capillaries and a little bit of the cortex of the brain immediately beneath those membranes,” says Cambridge University palaeontologist, David Norman.

The find, which is extremely rare, adds to evidence that neural tissues can be fossilised, suggesting that brain cases merit deeper scrutiny as the casts inside might bear mineralised soft tissues.