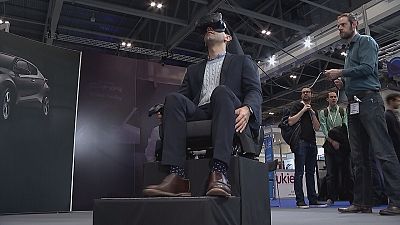 Video game enthusiasts are watching and waiting to see what virtual and augmented reality will come up with next.

It is predicted by market analysts IHS Markit that VR headset usage will jump from 4 million in 2015 to a whopping 81 million in 2020.

At the recent VR/AR show in London manufacturers and retailers showcased how they are adapting technology to entice their customers to their new products.

Francois de Bodinat is from Zerolight:“We’re coming from the gaming industry, we used to do racing games for cars. When you combine this experience with the high quality of the solution that we have today, it’s extremely high polygon, high quality in the materials and the lighting, we can start driving the car and add the rules of physics based on the car so you can see the car moving in a real space.”

Visitors to London got a taste of how virtual and augmented realities are set to expand in the coming years, a sure fire banker in the hi-tech market.

Vijay Michalik is a digital research analyst:“VR is, you know right at the beginning of an essentially big wave of technology. Some people refer to it as the fourth kind of computing era after PC, internet and mobile and I think that’s a pretty accurate description of the way VR and AR blend together.”

If gaming is still the main field of application nowadays, specialists are convinced that VR will be the major computing and communication devise after smart phones.

The big companies are already preparing the next bounce toward the future.