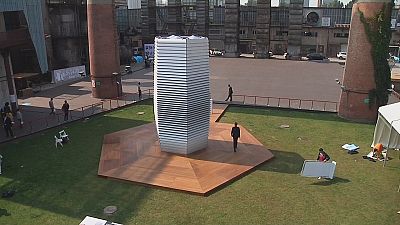 When Daan Roosegaarde visited Beijing three years ago, all he could see from his window was smog.

The Dutch artist decided to act, and created an innovative solution – a seven-meter high metal structure that contains an air-purifying machine that catches particles and turns them into black powder

Like a giant vacuum cleaner, the tower sucks in the polluted air and cleans it before releasing it.

“Basically, the design was inspired by the Chinese temple. It is sort of like a clean air temple – so the polluted air comes in from above, gets cleaned on the nano level, the ultrafine particles, and then the clean air comes through here (shows vents) and actually goes into the area around us, creating areas which are around 75% more clean than the rest of the city. So we are now in one of the cleanest spots in Beijing,” he says with a smile.

The entire process requires 1,400 watts, or roughly the same amount of electricity needed to run a water boiler, and is generated using wind energy.

But the tower is only one part of Roosegaarde’s Smog Free Project. His plan is to collect smog particles from the tower and compress them into Smog Free Jewelery.

“So here you see the cube sort floating in mid air,” he says, showing one of his rings. “This, the incredibly disgusting small particles that we harvested from a thousand cubic meters of clean air, compressing it and then sort of shielding it because it is very polluting. And we have wedding couples purchasing this as sign of true love, giving it to each other.”

The artist says each ring carries the equivalent of 1,000 cubic meters of air pollution.

The air tower is on display in Beijing before it sets off on tour across four of China’s most populated cities.